Originally published: February 26, 2019 Updated: January 27, 2022 7 min. read Software Engineering
Outsourcing, or allocating certain business processes to external providers has recently become increasingly popular. It has become so prominent in the global business world due to its obvious advantages. Outsourcing is cost efficient, it eliminates operational and recruitment expanses, allows to hire skilled vendors who will complete the tasks faster without sacrificing the quality.

When it comes to choosing an outsourcing destination many factors have to be taken into account. The most important factors that have to be overviewed are – the general development of the IT industry, the programmer’s competence, the price rates, as well as the country’s labor laws, and mentality of the people.

There is a strong tendency towards hiring IT developers from Eastern Europe, and the majority of entrepreneurs choose Ukraine to outsource their IT projects. So what makes it stand out from the neighboring countries? And why is Ukraine so alluring for business owners as an IT outsourcing destination?

The Development of IT Outsourcing in Ukraine

The boom of outsourcing to Ukraine has begun in 2015. During the course of the next years, the Ukrainian IT industry has rapidly expanded. Billions worth of software and IT services were exported from Ukraine and the pool of specialists continued to grow steadily. In 2017, the Global Sourcing Association (UK) has ranked Ukraine as the Outsourcing Destination of the Year, and in 2018, 18 of the Ukrainian IT firms were named to top 100 outsourcing companies worldwide by IAOP. The overall volume of the IT service exporting accounts for 3.4% of Ukraine’s GDP and the overall export value of IT services between 2015-2018 has shown a 19% CAGR.

The prospects are even more promising. Currently, the number of Ukrainian developers is approximately 185,000, and it is expected to reach 250,000 in 2020. The government continues to develop initiatives that have a positive impact on the IT industry. This includes taxing exemptions, enhanced intellectual property rights, as well as improved laws on data protection and cybersecurity. Currently, there are over 3,000 tech companies and a significant part of them focuses specifically on software development. The IT market is thriving with a competitive atmosphere, where Ukrainian outsourcing companies struggle for skilled IT specialists and foreign clients. The forecast of the IT services export growth for 2018 is around $4.5 billion, and by 2025, the industry predicts growth at almost twice. 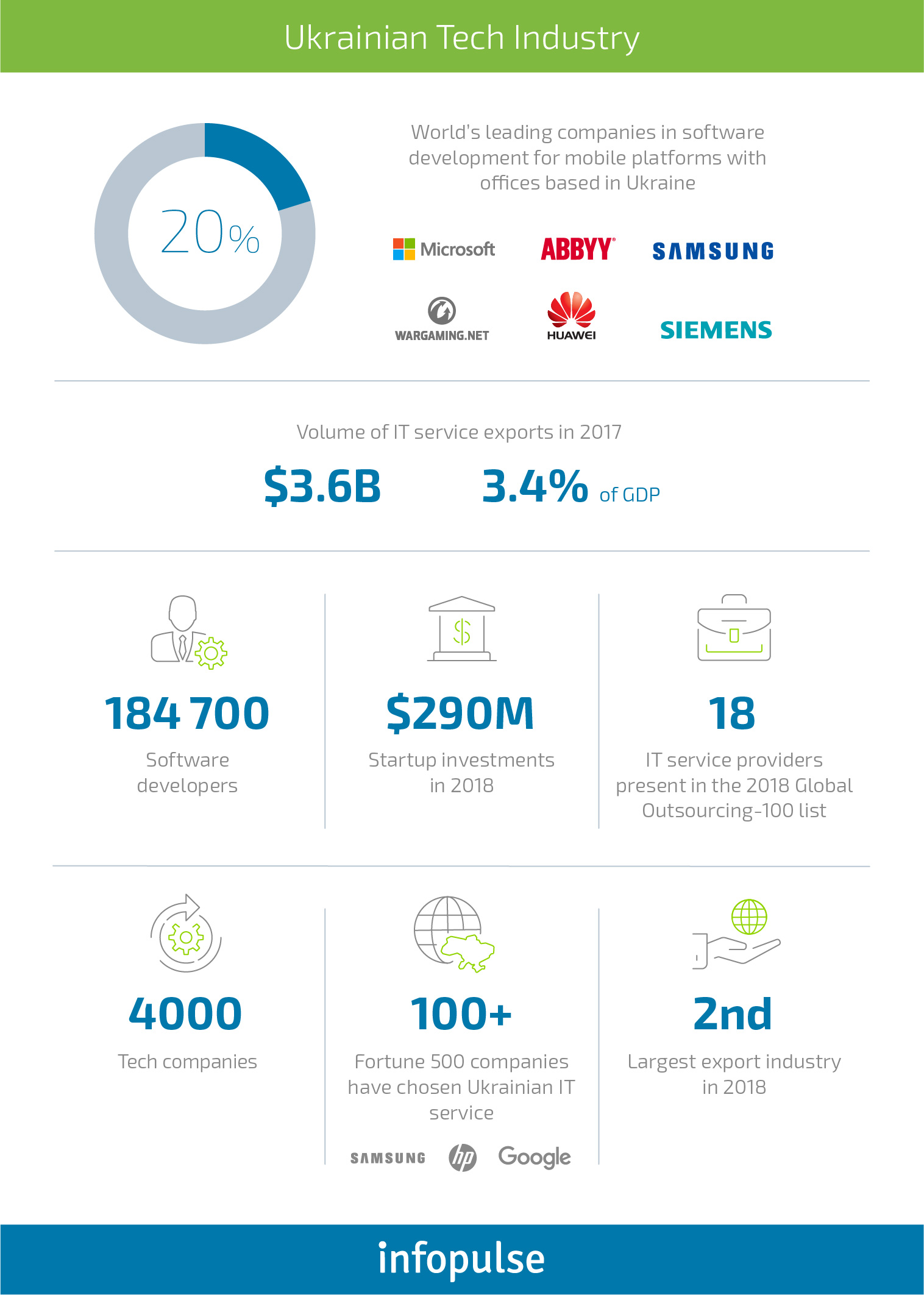 Beneficial Laws for Ukraine’s IT Industry

Ukrainian authorities have issued a number of laws that have accelerated the growth of the country’s IT industry. Recently, the Ukrainian Parliament (Verkhovna Rada) has adopted a law that simplifies the procedure for concluding foreign economic contracts, financial reporting for the export of services, as well as the exclusion of foreign exchange control for the export of services, that will help to develop the Ukrainian IT industry and the freelance market. For the adoption of the corresponding law No. 4496 “On Amendments to Certain Legislative Acts of Ukraine”, 270 deputies voted for the adoption, while the required minimum was 226 votes. The head of the Verkhovna Rada Committee on Industrial Policy and Entrepreneurship, Viktor Galasyuk, has said that this law demolishes the barriers for foreign currency revenues. He quotes: “In essence, we are aligning Ukrainian legislation with the conditions that exist in the world today… This law will promote Ukrainian IT specialists, creative industries, everyone who provides intellectual services, and it will eliminate artificial currency controls and regulatory barriers”.

Another important law that was adopted by the Ukrainian government is the law on the state sector cybersecurity. In June 2010, the Ukrainian Parliament passed the Law “On Protection of Personal Data”, which was then followed by a series of amendments. Last year, Ukraine has entered the EU-Ukraine Association Agreement and published a plan of measures for its efficient implementation. By this plan, Ukraine will soon bring all aspects of personal data protection in accordance with the GDPR.

For the software outsourcing industry companies, Law No. 5091 from 2013 provides beneficial terms for value-added tax and income tax exemption (corporate income tax rate is set at 5%). The Ukrainian government has adopted this law due to the desire to support the software industry, which is currently being in the state of explosive growth.

Since 2014, the authorities have focused on improving the overall business climate in Ukraine, and have made serious steps towards it. The Government has approved its Strategic Action Plan for the year 2020, it includes:

Moreover, to support profitable investment conditions, the authorities have created a number of institutions, for example the Governmental Commission for Investments and Ukraineinvest. As a result of the combined efforts, Ukraine has become a hot spot for foreign investors. For the past 5 years, the overall amount of foreign investments into the IT industry has exceeded 630 million dollars, which is a sign of swift economic development. The most active investors for Ukrainian IT startups are Soros Fund Management, Horizon Capital, IVP and Dragon Capital. The largest sum of funds were invested into Gitlab – $130m, Grammarly – $110m, Bitfury – $110m, and Neuromation – $70m. 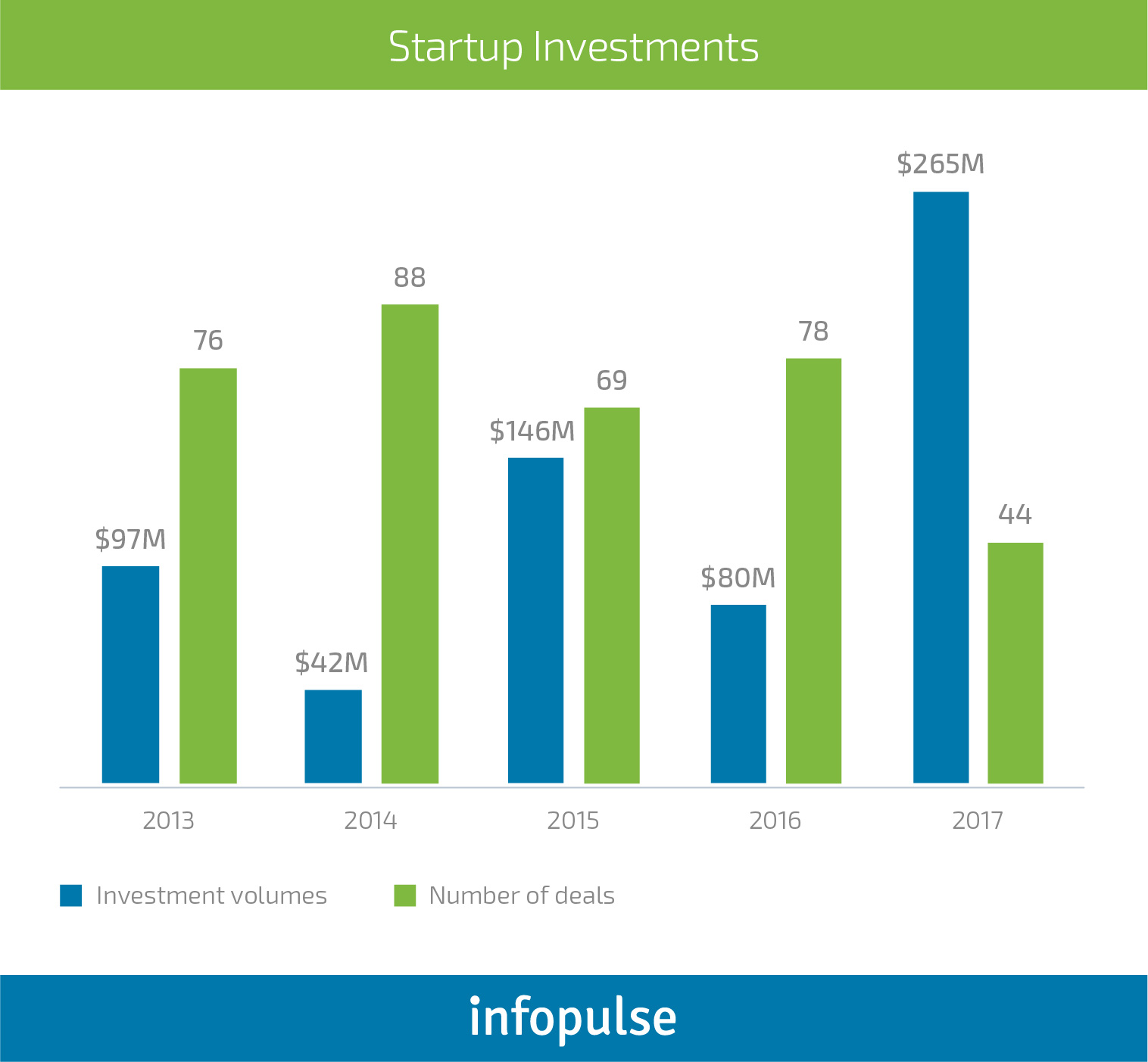 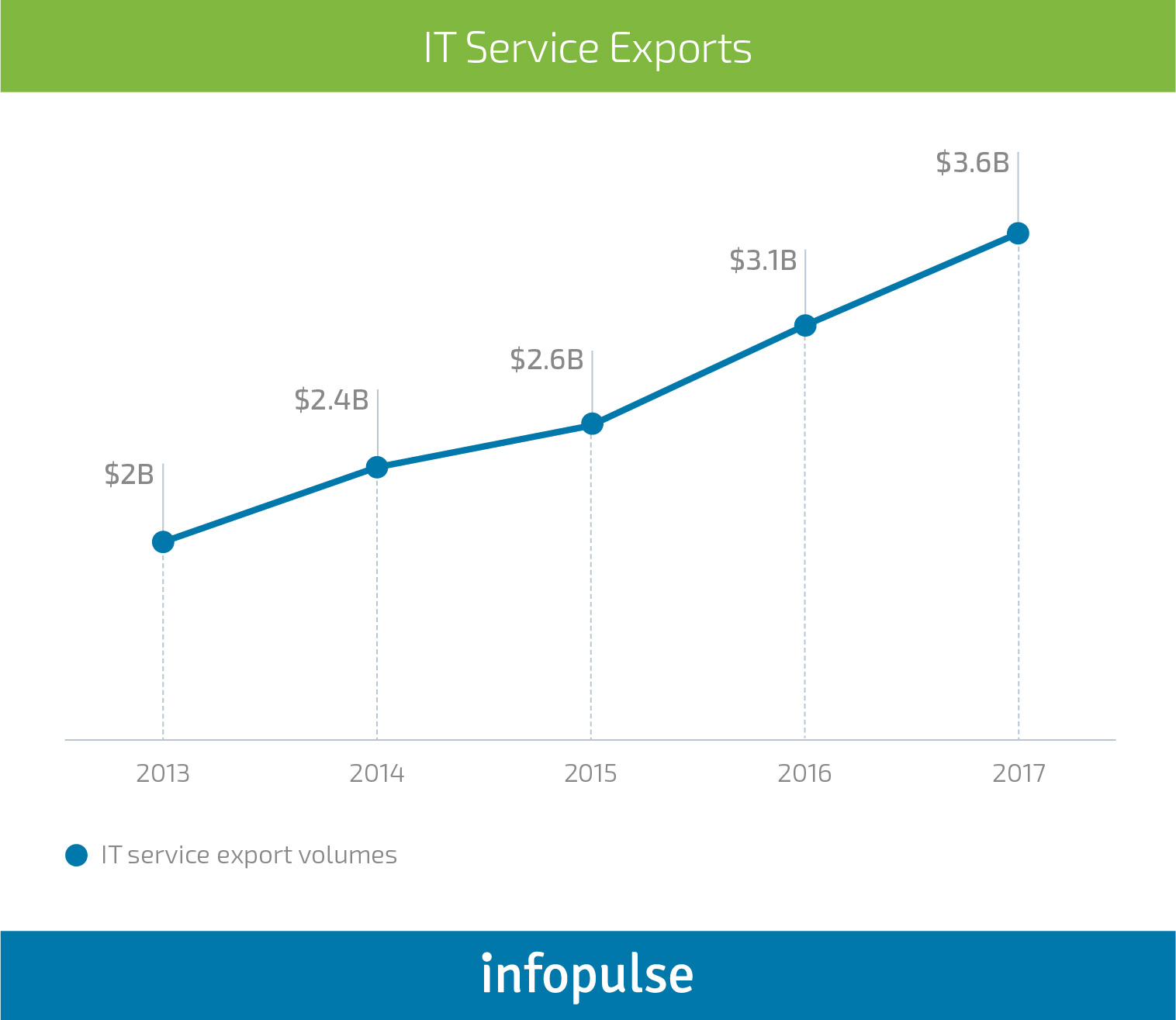 There are over 110 research and development centers located in Ukraine, with partners mainly from the United States, European Union, and Israel. The areas of expertise within these R&D centers are quite diverse, they include – Big Data, artificial intelligence development, E-commerce, telecommunications, and other software development fields. Most importantly, Ukraine is the home to the R&D offices of such tech giants as Microsoft, Apple, IBM, Magneto IT Solutions, Siemens, and more. The most prominent R&D offices in Ukraine are Oracle, where Ukrainian programmers develop cloud solutions, and the Samsung office, where Ukrainian developers work on computer vision, NLP, HCI, and converged devices.

There are also several technical laboratories in Ukraine that focus on versatile projects. Sensorama virtual and augmented reality lab provides access to AR/VR equipment and acquaints the visitors with the technology. DIY Lab is a workshop that allows working with 3D printers and robotic designers, and the employees may give their expert advice on your hardware, and Syngenta, a lab that creates digital innovations for agricultural businesses across Europe.

It’s crystal clear that among the other Eastern European countries, Ukraine has the most favorable business environment and a soaring IT industry, which will only continue to grow. But what are the specifics of working with Ukrainian developers, and is it really worth it? 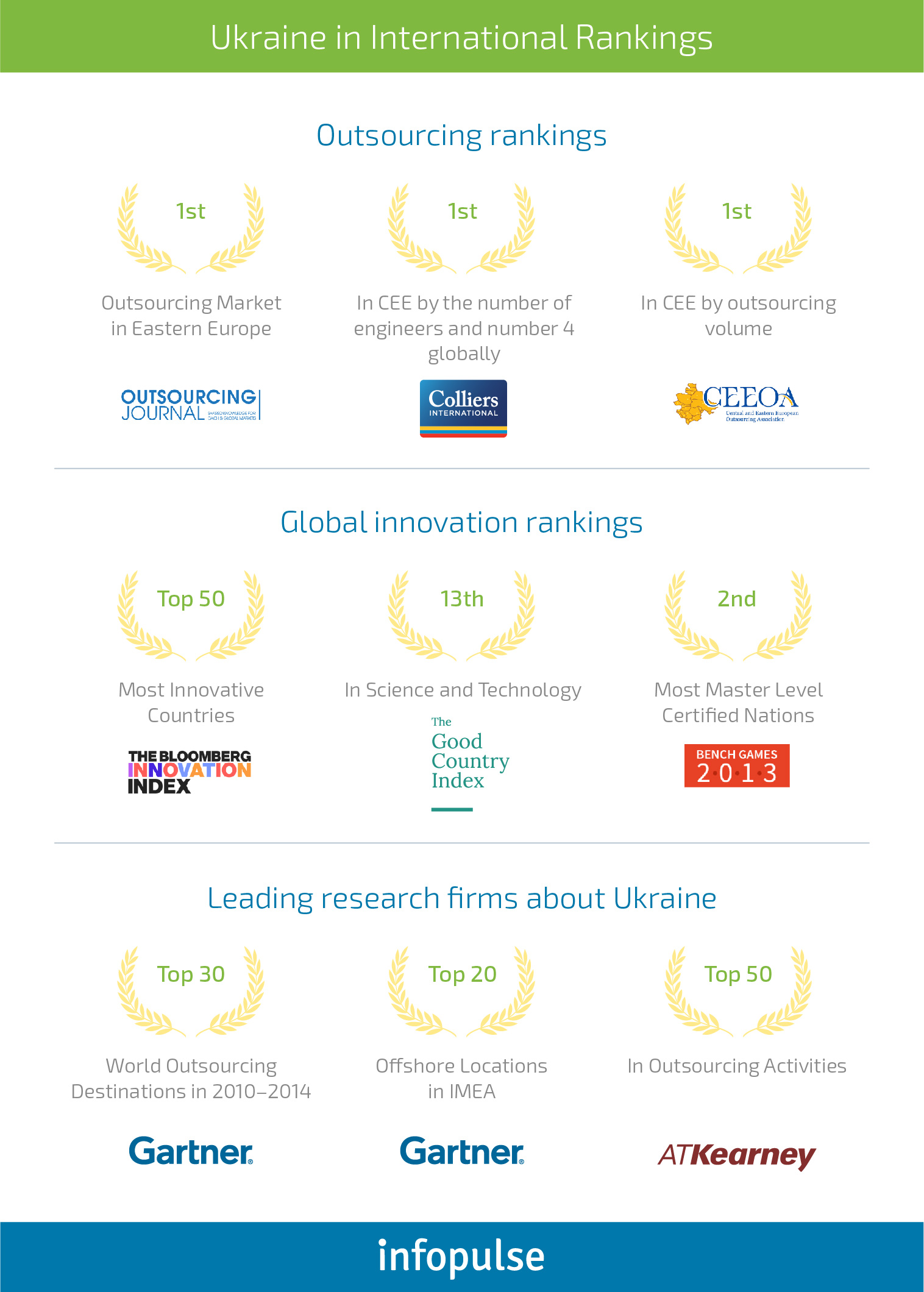 5 Key Benefits of Ukraine as an Outsourcing Destination

Ukraine has over 200 educational institutions where IT specialties are taught, and the average annual number of graduates in the fields of technology and engineering is 23,000. Most of the Ukrainian developers graduate from the Kyiv Polytechnic University, which is ranked 501st by the QS World University Rankings, and it’s considered to be one of the best universities in the CIS rating. There are two other polytechnic universities in Kharkiv and Lviv that are considered to be one of the best institutions in the fields of computer engineering, telecommunications, and IT.

Furthermore, the overwhelming majority of the young IT field specialists undertake additional software development courses and professional training, which makes them even more competent. The most famous courses in Ukraine are Computer Academy “Step”, Main Academy and CyberBionic Systematics that specialize in front-end development, and UnitFactory that focuses on game and app development.

Ukrainian developers are the most skilled and diverse specialists in Eastern Europe. They have a strong command of a wide range of programming languages, like Java, JavaScript, PHP, C#, C/C++, Python, Swift and others. Most importantly, the country ranks as #1 in the number of C++ and Unity 3 developers.

When it comes to software development, effective communication between the customer and the outsourcing vendor is crucial, but different time zones may be an obstacle for comfortable project discussions. The time zone of Ukraine is quite convenient – GMT +2. It’s just an hour ahead of most European countries, and 7 hours ahead of the US. If you’re located in Europe and there’s some kind of working emergency, it takes only 2-3 hours to catch a flight to any major city of Ukraine, like Kyiv, Kharkiv or Lviv. In case you’re from the US, the 7-hour difference may seem a little uncomfortable, yet the shared working hours are a lot more convenient in comparison with other outsourcing options, like India or the Philippines.

The language barrier may be another obstacle in customer-vendor communication. Luckily, most of the Ukrainian software developers have strong English skills. English is a compulsory subject in any school in Ukraine. Additionally, most of the IT companies provide corporate English language courses for their employees. Up to 70% of Ukrainian programmers have either intermediate, or upper-intermediate English levels, so no issues will arise during the communication process. 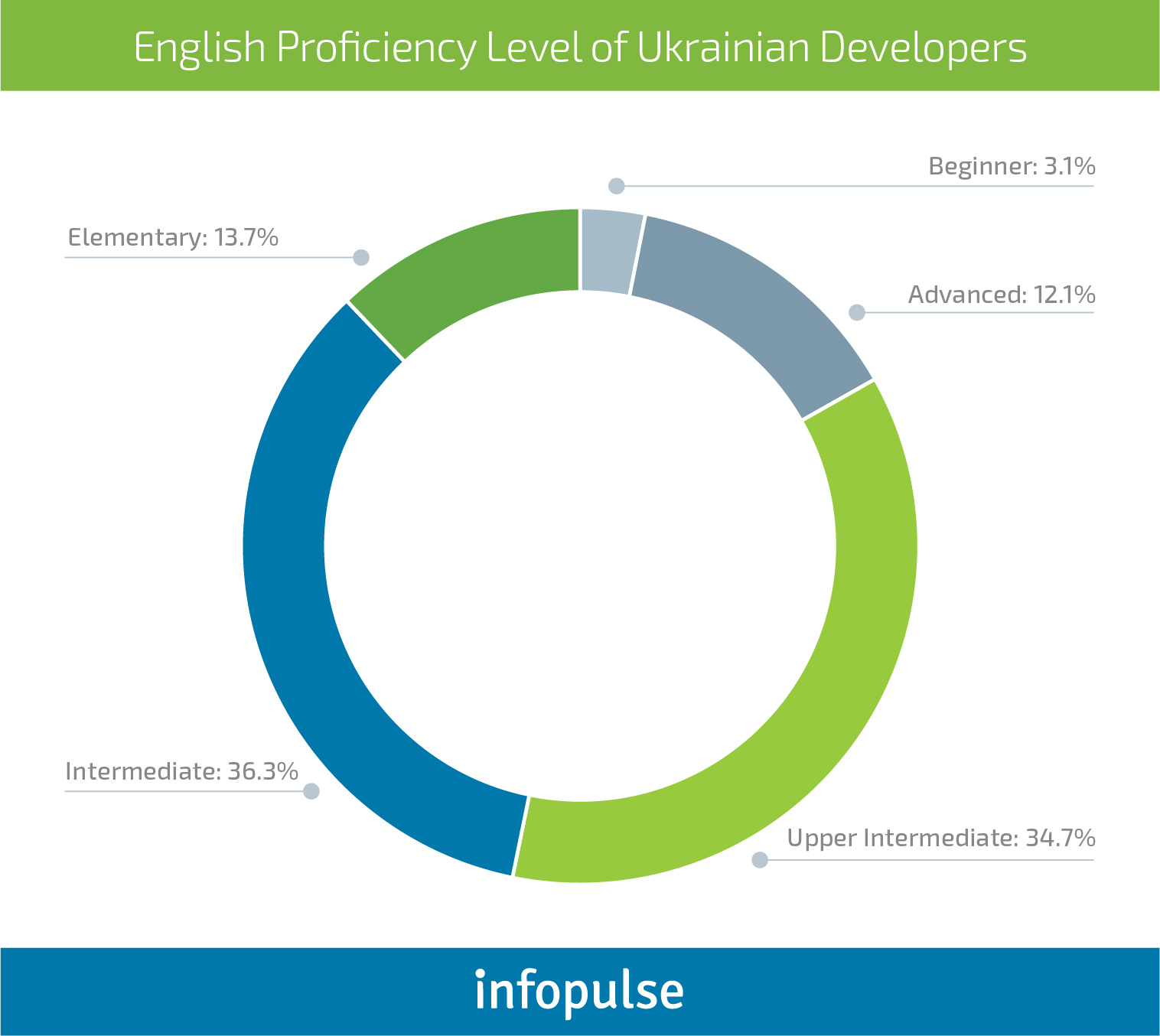 The major reason why entrepreneurs choose outsourcing is cost efficiency. It’s a lot more profitable to hire skilled developers abroad for a price which is twice or thrice lower. The average rate to hire a Ukrainian programmer ranges from 25 to 50$ per hour. These rates are a lot cheaper in comparison with other countries in Western Europe. In the yearly prospects, Ukrainian developers own around 4-6 thousand dollars per month, while developers in Central Europe or the US charge at least twice as much. If you choose one of the outsourcing companies in Ukraine, you’ll be able to spare approximately 40-60% of your funds, which is obviously extremely profitable.

The nation’s mentality and cultural background is another important factor to consider when choosing an outsourcing destination. Sharing identical values and worldview and be a great accelerator for the workflow between the customer and the outsourcing vendor.

In terms of work, Ukrainians share the same values as the residents of Central Europe and the USA. Ukrainians are very hard-working and responsible, they are motivated and are constantly willing to endure new challenges. Ukrainians are keen on teamwork and always help each other out in case of trouble. Moreover, they are constantly willing to learn from senior colleagues and enjoy communicating with their like-minds. Ukrainian developers aim to make every project they work on successful, and are always dedicated to make high-quality software and establish long-term relationships with the clients.

Infopulse has been an IT outsourcing company for over 28 years now, and currently we are one of the largest IT companies in Ukraine. Moreover, Infopulse is featured on the list of the Best of the Global Outsourcing 100® and now we are trying our best to advance the development of IT in Ukraine. We encourage professional growth, and the employees of Infopulse were the very first in Ukraine to complete the ISTQB Certification for Testers, as well as CBAP (Certified Business Analysis Professional), a business analyst certification. Others have become Certified Scrum Practitioners, Certified Information Systems Security Professionals, Certified Business Continuity Implementers, and K2 Solutions Professionals.

As a #1 Best IT Employer in 2018, we constantly expand our educational foundation, and over 80% of our developers have postgraduate degrees in ICT. Besides closely working with all of the leading Universities in Ukraine, Infopulse has created its own IT University that offers courses on a wide range of subjects, like Java, C++, Business Analytics, Data Science, Machine Learning and more. At Infopulse we offer different mentoring programs for the newcomers, as well as various workshops and seminars. We also participate in the most significant IT conferences and events in Ukraine.

Ukraine is currently the leading outsourcing destination in Eastern Europe, and the country has earned this status for a good reason. Its IT industry is booming and will continue to grow swiftly in the nearest future. It has an enormous pool of experienced and dedicated software developers who are willing to work and build trustworthy relationships with their clients. In terms of time zone and cost efficiency, choosing one of outsourcing companies in Ukraine is the most convenient option for both European and American customers. If you’re willing to begin your outsourcing work, Ukraine is certainly your best choice.