The technology of mirroring the smartphone’s data to a vehicle’s dashboard finally made such a vehicle’s IVI systems friendlier and more functional. Drivers really appreciated the opportunity to easily access their frequently used Google Maps, Waze, YouTube Music, Spotify, and multiple social media apps on bigger less-distracting HMI screens. The latest version of Android Auto comes with even more updates, such as added app launcher meaning fewer taps are needed to open an app, improved and simpler interface, larger icons, and a dark theme resembling the car interior.

In 2018, mirroring solutions (Android Auto and Apple CarPlay) were already standard or additional features for all new cars purchased in Europe (46%) and the US (over 50%).

High demand for mirroring solutions is a clear sign that legacy in-vehicle infotainment (IVI) systems can no longer meet the users’ needs and keep pace with the new digital cockpit trends. All too often, sluggish in-vehicle navigation systems add limited entertainment options (radio, audio playback). However, the major issue of all legacy IVI systems is their old-fashioned user interface that has greatly advanced in Android platforms due to Google’s large investments and decades of software engineering. Among other critical pitfalls of classic infotainment systems are their complex and complicated search options. Their step-by-step destination entry may take over a dozen taps to finally enter an address. Changing it while driving seems a nearly impossible feat.

On top of that, the ever-increasing complexity of a digital cockpit requires more investments of OEMs and Tier 1 suppliers into the implementation of safety-related and entertainment features. Hence, out-of-the-box solutions such as Android Automotive OS can greatly cut costs on additional research and development of a fully viable HMI solution.

Time-consuming and expensive development of proprietary IVI software and mainstream adoption of Android Auto (already compatible with hundreds of car brands) swayed OEMs in favor of new cooperation opportunities. Legacy automakers such as GM, Volvo, and Renault-Nissan-Mitsubishi Alliance were the first to partner with Google to build a new breed of infotainment systems powered by the Android Automotive Operating System.

Volvo was among the first to showcase the early versions of vehicles (XC40 and Polestar 2) with Android Automotive OS in the core. GM, Audi, and Fiat Chrysler are also joining the race.

Android Automotive OS is a fully customizable embedded infotainment system designed to seamlessly connect to an array of Google services and third-party apps (e.g., Spotify, Amazon Music) familiar to millions of users. According to a new study by Frost and Sullivan, more and more automakers favor adopting Android OS, allowing them to tap into consumer electronics technology behind it. They also predict that by 2025, Android Automotive OS will hold the top positions in embedded infotainment.

For OEMs and Tier 1 Suppliers

Android Automotive OS adoption can cause a considerable shift in common drivers’ attitude towards disappointing features of legacy infotainment systems:

With the recently added Google Play services and Android Automotive out-of-the-box features, OEMs can already set to reinventing their legacy infotainment systems. However, they should consider the fact that Android Automotive OS lacks automotive-specific functionality. Numerous APIs are unavailable or restricted as many services are still in their alpha stage.

Since Android Automotive is only picking up steam and can’t meet all the needs of OEMs and Tier 1 suppliers, you’ll have to fill the gaps with custom-built features. To cover all the layers of an embedded infotainment system, OEMs will have to integrate their hardware, processing algorithms, and proprietary software solutions into Android Automotive OS. The good news is, its flexible architecture with Linux Kernel at the core allows for a variety of integrations and most importantly, implementation of custom features.

Let’s take a closer look at Android Automotive OS architecture at this point: 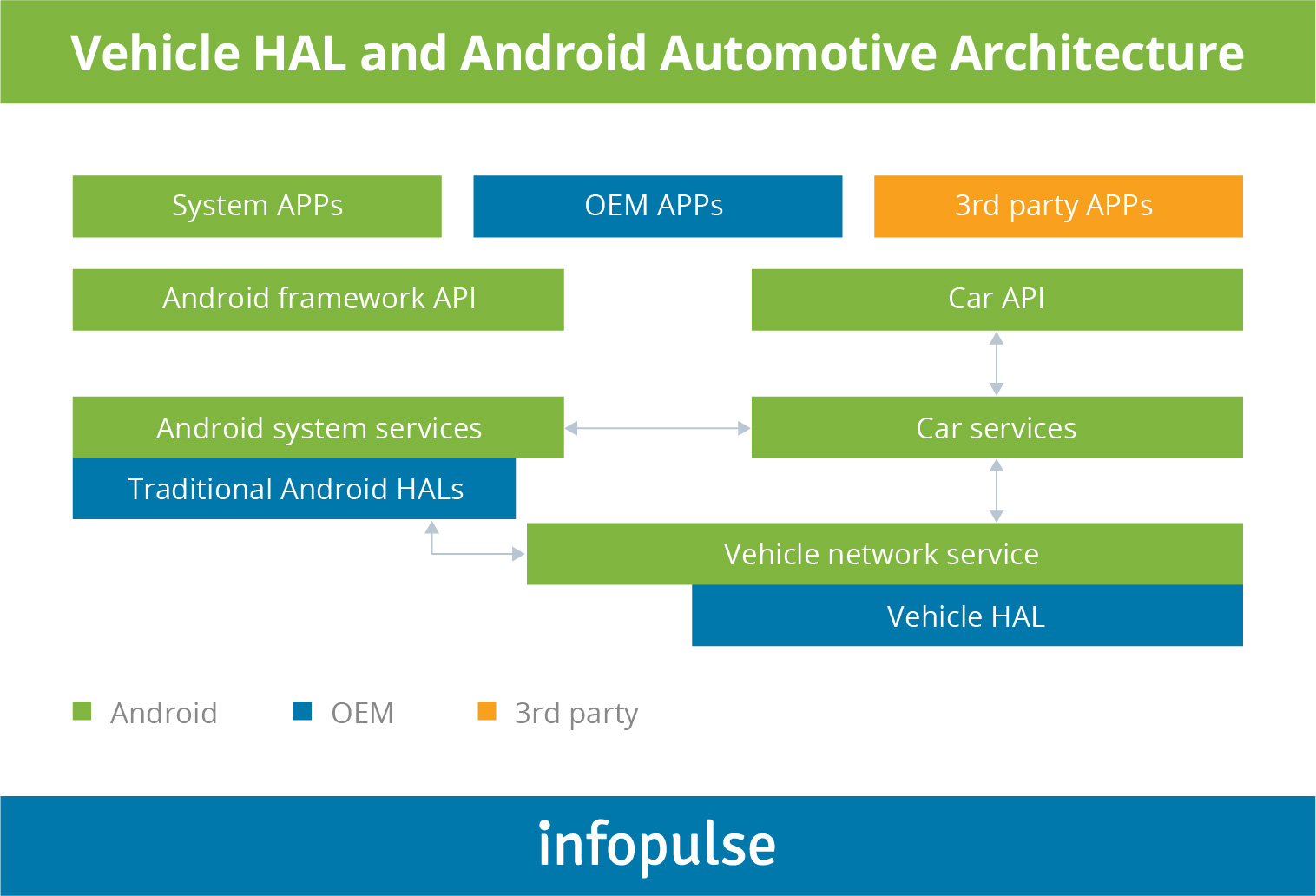 At first glance, you can tell that an integrated architecture of a ready-to-go infotainment system suggests the necessary inclusion and modifications needed from OEMs, Tier 1 suppliers, and third-party Android application providers.

How to Implement a Custom Feature on Android Automotive OS?

To build a custom solution, you should implement a series of modifications of the Android Automotive OS components. Let’s assume you need to enable multi-user support with custom Separated Sound Zones (SSZ). The latter brings on the element of personalization to your infotainment system, highly anticipated by all the consumers of digital content today.

The modern infotainment system is expected to provide intuitive guidance, real-time road data, interaction, and entertainment not only for the driver but also for the front- and/or rear-seat passengers. It means more displays are needed for each person to access a separate device and stream their audio content without interfering with the others and communicating with a single Android UI.

You can address this complexity with two possible options. You can install a separate SoC for each screen, but it’s a cost-intensive solution. Or, you can apply one powerful SoC with the Android Automotive OS behind it. The problem is that we need to isolate the environment inside Android for every user to enable their individual communication with the vehicle’s audio system.

At this point, we come to a series of modifications in the Android OS to implement the solution. This will require overrunning different levels illustrated in the diagram of the key Android platform components:

Source Here are the components that need to be modified:

A customer-tailored infotainment system requires new approaches and software solutions for OEMs and Tier 1 suppliers to adopt. One such is a robust and scalable Android Automotive OS promising to reshape infotainment experience with very well-liked built-in multimedia apps, navigation, connectivity solutions, and already available third-party integrations. However, to build an integrated and fully capable IVI system, OEMs will still need some OS component modifications and custom features implementations as described in this article.