Manual vs. Automated Software Testing: Balancing Between the Perks and Downsides

Originally published: April 04, 2019 Updated: December 29, 2022 7 min. read Software Engineering
The traditional approaches to software delivery were never designed to deal with the ever-evolving environment businesses are now facing. Agile development and Continuous Delivery (CD) are the aspirational goals of many companies today. However, such operational transformations do require a holistic and balanced approach.

This post offers a deep level overview of what is automated testing in software testing and how to do manual testing the right way in the age of DevOps and Continuous Development.

What is Manual Testing?

Manual testing is performed by QA engineers without the usage of any tools for automating the tests execution. Different types of case tests are created manually to identify possible flaws in the software code, as well as product design. In most cases, manual testing is not optional as every application must be checked “by hand” before any automation can take place. Despite being quite a time- and effort-demanding, manual testing remains popular among businesses. Per a recent industry survey, 42% of companies indicated that their testing activities are “mostly” or “entirely” manual.

The Advantages of Manual Testing

What is Automated Testing?

As the name indicates, automated software testing assumes the use of tools to execute pre-scripted test case suites. The test results are sent for further programmatic analysis and the QA specialist can benchmark the expected vs. actual test results and review detailed reports.

However, QA engineers are not directly involved in the tests execution. They only develop and set up test cases at the preparation stage and assess the testing outcomes. Automated testing largely improves the ROI of QA as it’s aimed at reducing the number of test cases required to be run manually and repeatedly during a large project.

It is important, however, to understand the difference between automated testing and test automation.

In the course of this post, we’ll dwell on test automation in particular, and how it should co-exist and supplement manual software testing.

What Are the Benefits of Automated Testing?

Why Test Automation is Essential for Continuous Delivery and Continuous Testing

As more companies embrace DevOps and continuous delivery model, new approaches to testing become necessary. CD framework assumes that your software components are always in the deployment-ready state, meaning that you can no longer postpone testing to the very end of your project. A software change has to continuously move from Development to Testing to Deployment – and that’s where continuous testing comes as an essential measure. 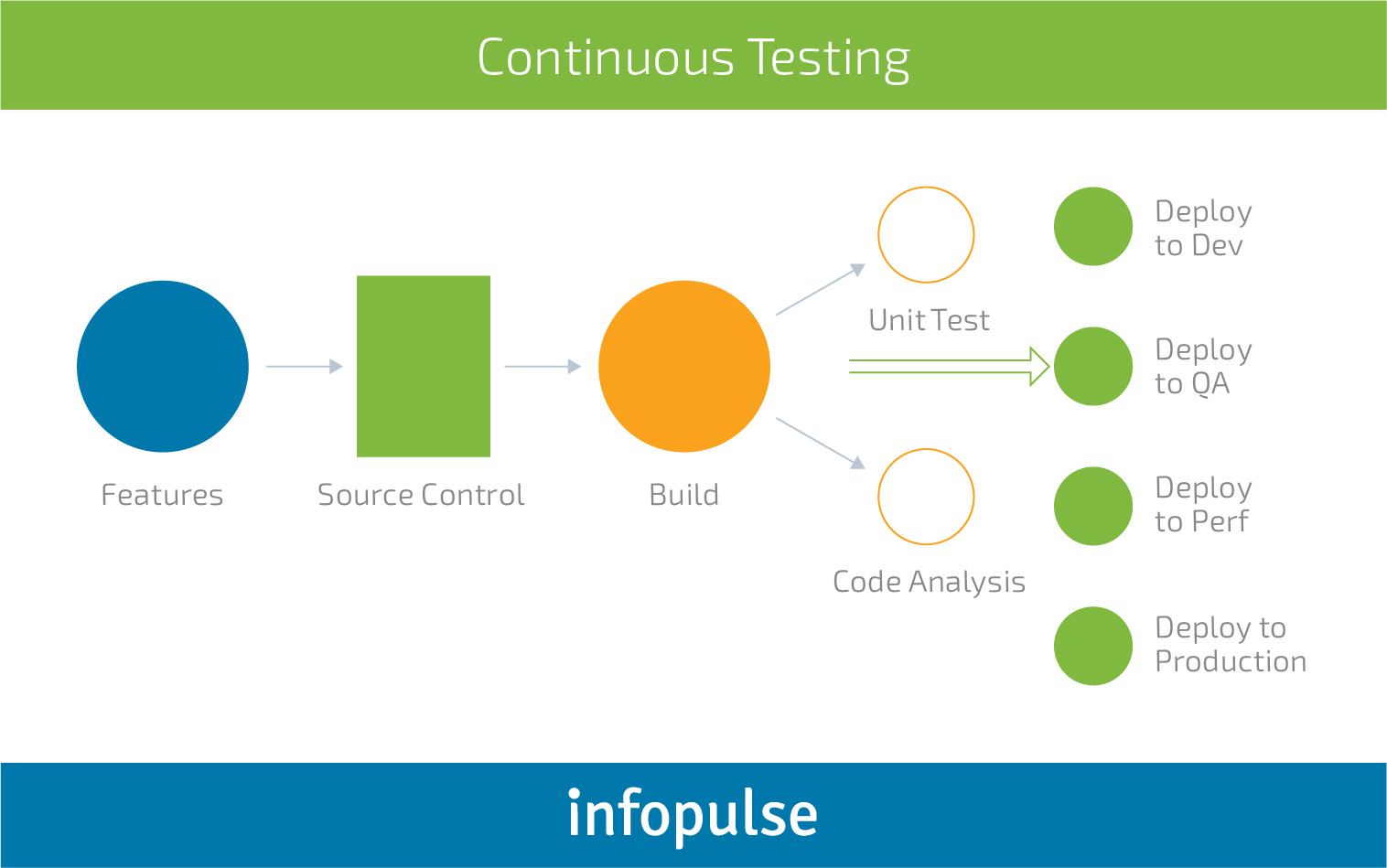 Continuous testing ensures that all QA activities happen in smaller batches whenever the need arises, rather than at the end of a development cycle. According to a recent survey by CA Technologies, 75% of business leaders rank continuous testing as a critical or important component of their development lifecycle.

However, continuous testing is also a massive undertaking. It requires significant investment in new automation tools (which 63% of survey respondents often found too complex and/or expensive); plus stronger communication and collaboration effort among your teams and certain changes in the workflows – 73% of respondents strongly agreeing that continuous testing requires a major shift in mindset and culture.

But those efforts do pay off. Companies with a mature continuous testing framework in place reported the following benefits:

The importance of automation testing becomes paramount in this case, as it helps ensure that all teams receive timely feedback, and maintain the same levels of quality standards during the entire production pipeline.

To achieve this, your test automation initiative should be aimed at filling the next imperatives:

The common risk to account for when preparing for automation and ultimately continuous testing adoption is to avoid speeding up test data acquisition process just for the sake of gaining access to some data, without considering the security and compliance risks.

Moving from manual testing to automation cannot happen in a rush or in leaps. Having a strong business case for automation and a deep understanding of the pros and cons of automated software testing is mandatory when deciding on the new testing setup.

When Not to Automate Testing?

High initial adoption costs are often named among the main disadvantages of automation testing. Certainly, the technology investment costs may look steep at first, however, in the long run, the ROI of automated software testing proves to be positive for the most mid-to-large scale projects.

Scripts can run as much as 5 times more test per hour than humans, meaning approximately 15X more code gets covered per day. This significantly reduces the average cost of a testing hour. As mentioned already, automation tests allow to identify bugs earlier and reduce the costs of fixing those.

Still, there are certain scenarios when automation may not yield you the desired ROI:

When to Automate Testing: The Common Types of Automated Tests

Now let’s take a closer look at when automated testing is required. Tests can be automated on several different levels, tackling the various aspects of your application. First of all, you can deploy automation to assist you during different phases of testing:

Unit tests are aimed at checking the smallest components of your application (a unit). These are the cheapest and faster to write, and relatively easy to maintain. Plus, they offer the highest ROI as the help ensure higher code quality on a granular level.

The new test-driven development (TDD) paradigm, for instance, assumes that programmers develop unit tests prior to writing code. Once the code is done, unit tests are deployed automatically to verify it. This way your team mitigates bugs, instead of fixing them. The only drawback is that unit tests do not prevent bugs in logic. Hence, they should be paired with API tests.

API tests are performed during the integration phase. They can be scheduled by either the development or testing team to be executed before the UI layer is added to the product. API tests are the prime candidates for automation as API design can be controlled through a central definition (e.g. REST APIs are defined as OpenAPI definitions) and seamlessly used throughout the software lifecycle and the automation pipeline. By 2020, Smartbear predicts that 77% of QA engineers will automate more than half of their API tests.

GUI tests are required to make sure that your interfaces are spot on. However, automating such tests requires the most time to create and properly maintain. There are both significant advantages and disadvantages of automated testing in this case, as GUI tests tend to result in more false positives/negatives than other types of automated tests.

To further determine when to use automated testing, you should also assess the different automation options based on the type of tests:

For these types of cases the benefits of test automation over manual testing are rather apparent:

Mastering the Balancing Act of Manual vs. Automated Testing

The major difference between manual and automated testing is speed. Manual testers are certainly not as fast as automation software and can make blunt mistakes. But automated test cases are only as good as their creators are. Without a deep understanding of the product and certain creativity employed by the developer, automation tests will fail to identify a simple issue a human tester could immediately notice (e.g. a problem with misaligned titles).

As we mentioned earlier, testing can never be automated by 100%. There will always be a certain level of human involvement present. Businesses who manage to strike the right balance between manual vs automated testing gain the most benefits.

The main case for automation should be eliminating the repetitive, time-consuming tests that your team is performing frequently, and gradually “shift-left” – incorporate testing into everyone’s thinking as early and as easily as possible, beginning with requirements definition.

By embracing a deeper level of automation, your organization can unlock a wider scope of DevOps benefits, adopt the continuous delivery/integration model and deploy code up to 30% more frequently with 50% fewer bugs.

Infopulse team invites you to schedule a discovery session to assess your current testing setup and future needs and develop a custom framework for moving away from manual testing to automation when necessary. You can learn more about our testing services here.