Open Source – Who Benefits from it Most of All?

Source code stands behind software just like design blueprints or know-how information behind the manufacture of any highly engineered product, which usually constitute a commercial secret.

In terms of software development, “open source” is software, the source code of which is intentionally made public so that anyone could examine, copy, and modify it in contrast to “closed source”, where only its authors possess exclusive control over software source code.

In a broad sense, “open source” refers to something, design of which is publicly available for anyone to view, share, and contribute.

More than that, today the open source becomes a new paradigm reaching far beyond the technologies. It is called “the open source way” – a specific approach to collaboration in many fields like manufacturing, science, education, health, etc. The open source projects are community-oriented and built upon the principles of open exchange, transparency, rapid prototyping, open participation, and meritocracy.

Who Governs the Open Source Domain?

Free Software Foundation and the Open Source Initiative organizations laid the path and created basic guidelines spreading the open source ideas, values and principles. Along with many prominent in the computer world persons they gave birth to the open source movement worldwide.

But except for general guidelines and open source community culture, there is no outer formal structure to supervise or control the open source projects. Anyone can start and manage an open source project in his own way. The only formality stands out at the stage of licensing.

Intellectual property is protected by the copyright law by default. To release users from the liability special licenses are applied.

Much a Do about Licensing

Before early 1970s computer programs and their source code were not subject to copyright in the US. The software was kept a commercial secret and marketed being embedded in the hardware. On the other hand, academic institutions and programming communities shared their software and source code for scientific or learning purposes. Only in 1974, the US Commission on New Technological Uses ruled out that these works must be copyrightable equally to literary works, thus beginning the era of software licensing.

Besides the open and closed source codes and related license implications, the major difference between the open source and commercial software lies in the way it is created. The open source development is extremely collaborative inviting and encouraging everyone interested to participate and contribute.

Enthusiasts are proud to take part in a significant open source project, which can draw thousands of people all over the world into collaboration process. Thus it creates opportunities never available to commercial development. Due to massive contributors’ participation the software development life cycle (SDLC) becomes much shorter and the resulted product contains less shortcomings and security vulnerabilities. As Linus’s Law, named in honor of the creator of Linux operating system Linus Torvalds, says: “Given enough eyeballs all bugs are shallow.”

The most outstanding feature of open source projects is that people are united around common values. It is about a strong ethical aspect incorporating transparent collaboration and willingness to share. The open source projects provide an opportunity to improve the world by the united efforts of all its participants. This way open source becomes a modern philosophy, collaboration model, a way of thinking and acting altogether.

Open Source Software: Who is it good for?

One might think that open source software is of value only to computer geeks interested in playing with the code. Programmers and common users all benefit from open source developments. In fact, any users of computerized devices deal with open source software even without knowing it. For instance, almost all software components the Internet is build of are open source. Other examples represent popular browsers like Mozilla Firefox and Google Chrome, or Android operating system managing mobile phones and tablets. 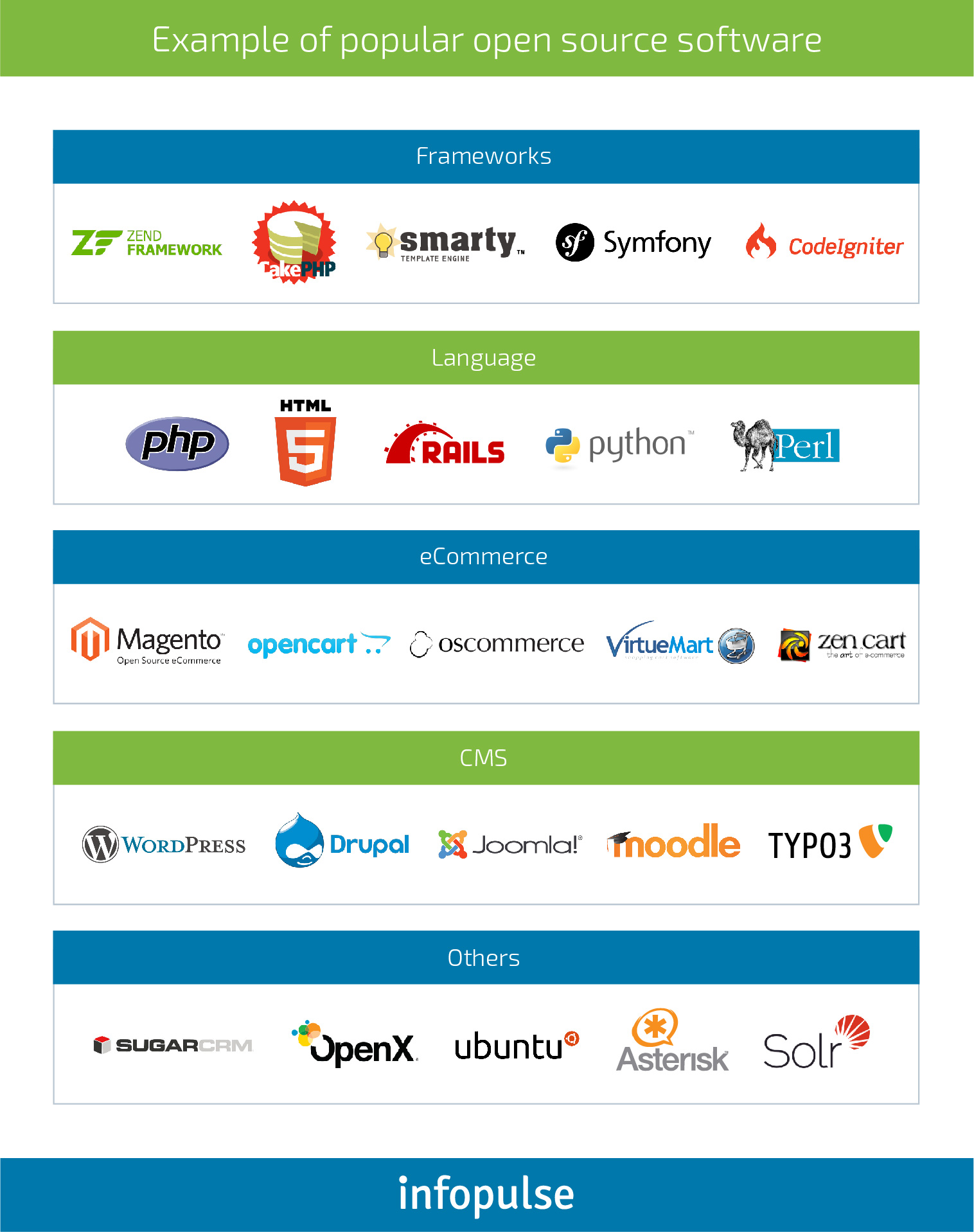 These are implementations people may use automatically without realizing what technologies stand behind them. But many advanced users, once in a while, have to make a choice between installing proprietary or open source software on their machines. This decision may be based upon cost, functionality, convenience or personal preference considerations.

Open source software is popular not only among individuals, but businesses especially. It is ideal for startups sparing them a good chunk of expenses, which can be invested into their mission-critical activity. The free to use software can be anything ranging from a platform, an operating system to desktop or web applications providing emerging businesses with a prompt start. The cost of using proprietary software on hundreds or thousands of computers can be crucial for a budget of even a well-established enterprise.

Moreover, there is a variety of open source solutions designed specifically for enterprises. To name but a few, these are servers, DBMS engines, storage systems, backup and recovery systems, multiple applications like CMS, ERP, CRM, e-commerce, accounting, email and calendaring, etc., whether desktop or cloud-based, to cater for any grade of enterprise infrastructure. For instance, the most popular DBMS, in particular MySQL, PostgreSQL and MongoDB, are open source. Same popular is an open source Apache web server.

But no matter which open source software an enterprise may choose, the advantage is that with minor adjustments in the code it can be further customized to fit one’s current or future needs. This freedom opens a way to continuous innovation and improvement.

Even enterprises seeking for extremely individualized solutions tailored to their specific needs can benefit from the open source. Using ready-made open source platforms, plugins, libraries, etc., as building blocks in the development process may reduce the development time and budget dramatically.