In this post, we provide an overview of how each of these technologies is directly tied to additional revenues and why investing in them today is integral to remaining competitive and profitable in the next decade. 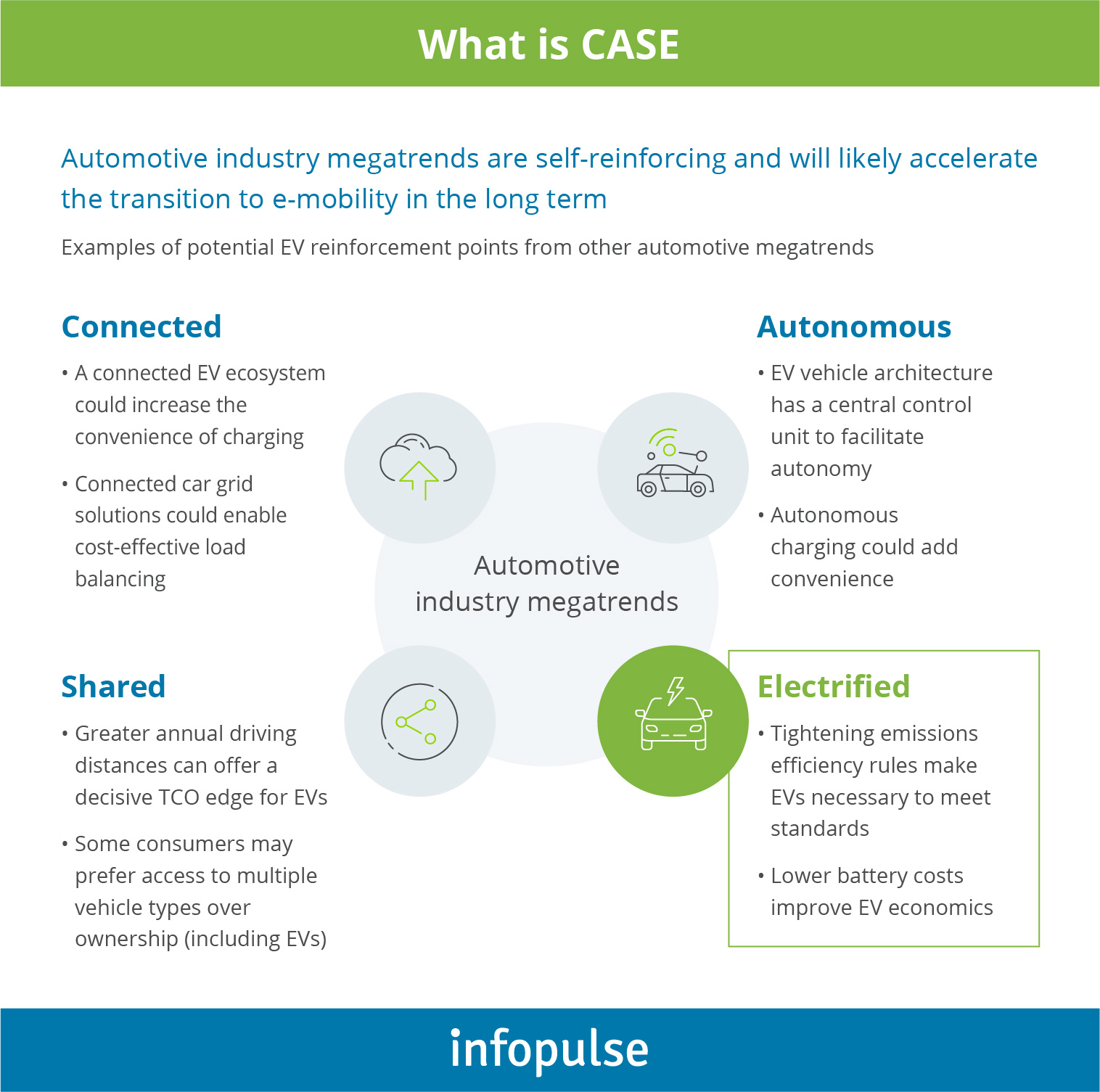 59% of OEM executives rank connectivity and digitalization as the most important automotive key trend up to 2030.KPMG global automotive survey 2019

A connected car is a passenger vehicle with an embedded Internet connection, powered by WLAN or 5G (4G) connectivity, with a proprietary Telematics Control Unit (TCU) hardware processing all the data exchanges.

A connected car is a passenger vehicle with an embedded Internet connection, powered by WLAN or 5G (4G) connectivity, with a proprietary Telematics Control Unit (TCU) hardware processing all the data exchanges.

Such connectivity setup enables the in-car support for a broader range of functions and features such as:

The new segments of connected cars, such as those released by Porsche, Audi, BMW, Volvo, and Mercedes Benz, among others, delight drivers and passengers with a new level of comfort, safety and security; and that directly reflects in OEMs revenues.

According to Adobe “Future of Driving” report 2019:

Leaders in the connectivity space are already seeing returns on their investment in better connectivity in the form of additional revenues and higher profit margins. Specifically, the OEMs are testing out the following connected car data monetization options:

Beyond that, automotives are looking into geo-location advertising, new-gen infotainment and personal health monitoring as additional value-added services for drivers. Ultimately, Counterpoint research estimates that connected car revenues will increase five-fold between 2020 and 2025, reaching $24 billion worldwide. The majority (58%) of profits will come from new connected services.

Some other data can be seen in our infographics below: 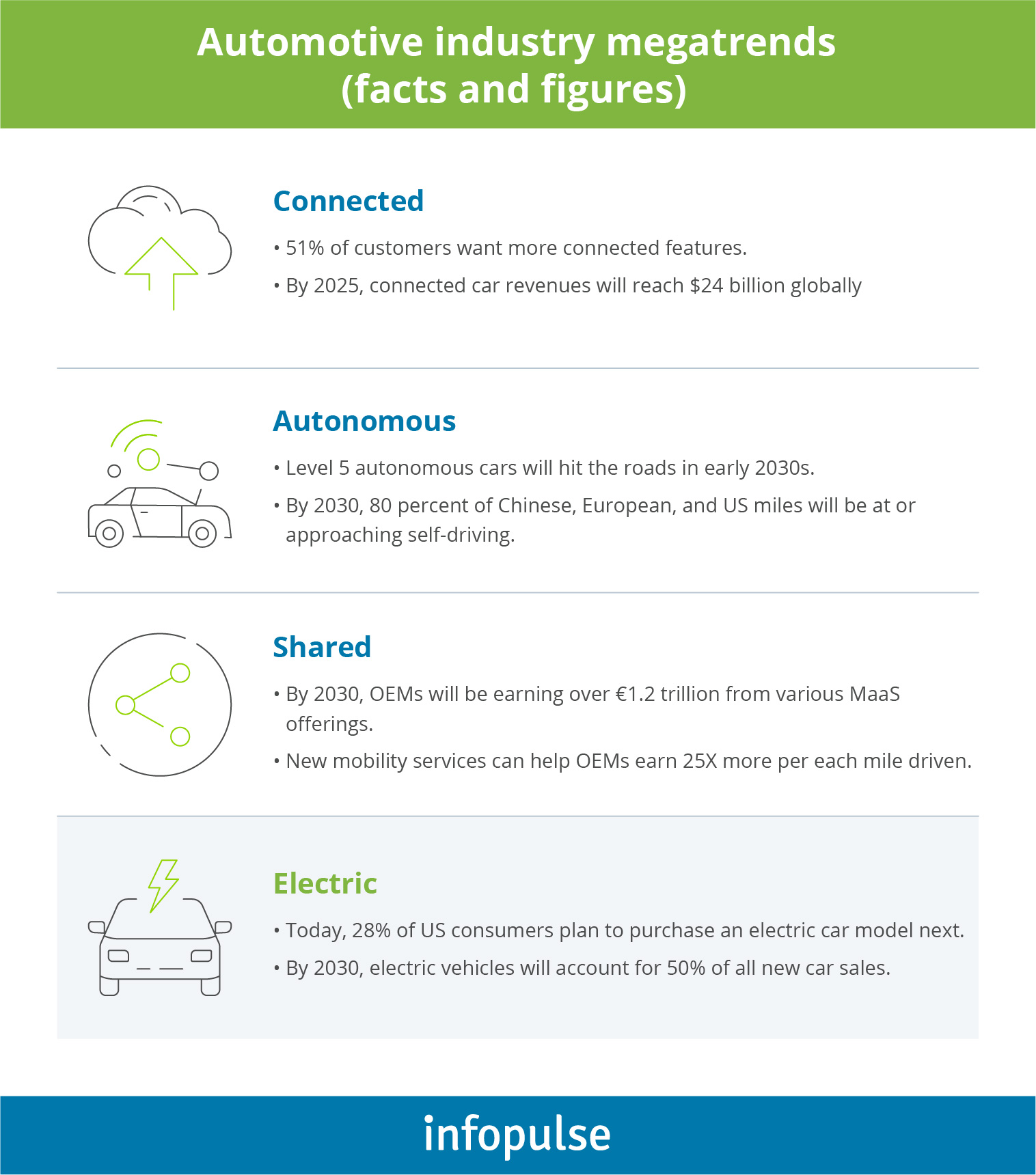 Here’s a brief recap of what is an autonomous vehicle:

An autonomous vehicle (Level 5) is a vehicle that can drive itself to a predefined destination without any direct involvement from the driver. The “autopilot” mode is powered by several in-vehicle software and hardware components such as IoT sensors, adaptive cruise control, steer by wire and brake by wire systems, GPS navigations, radars or LiDARs, computer vision algorithms, and advanced machine learning algorithms (such as neural networks). 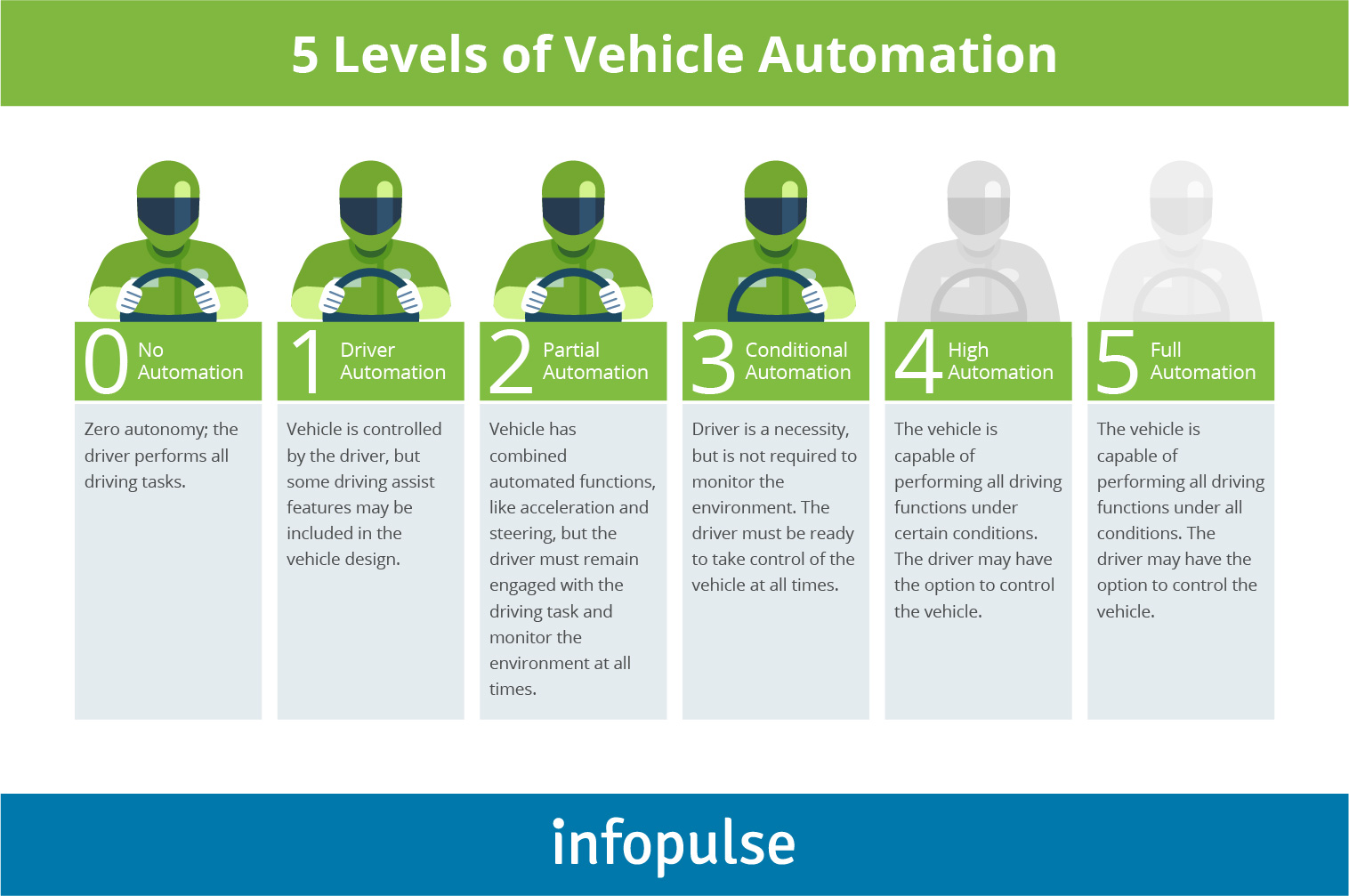 At present, most market-ready self-driving solutions (such as Ford’s Co-Pilot 360, Tesla’s Autopilot, and GM’s Super Cruise) offer Level 2 automation. The mass transition to full autonomy will likely happen in the early 2030s: 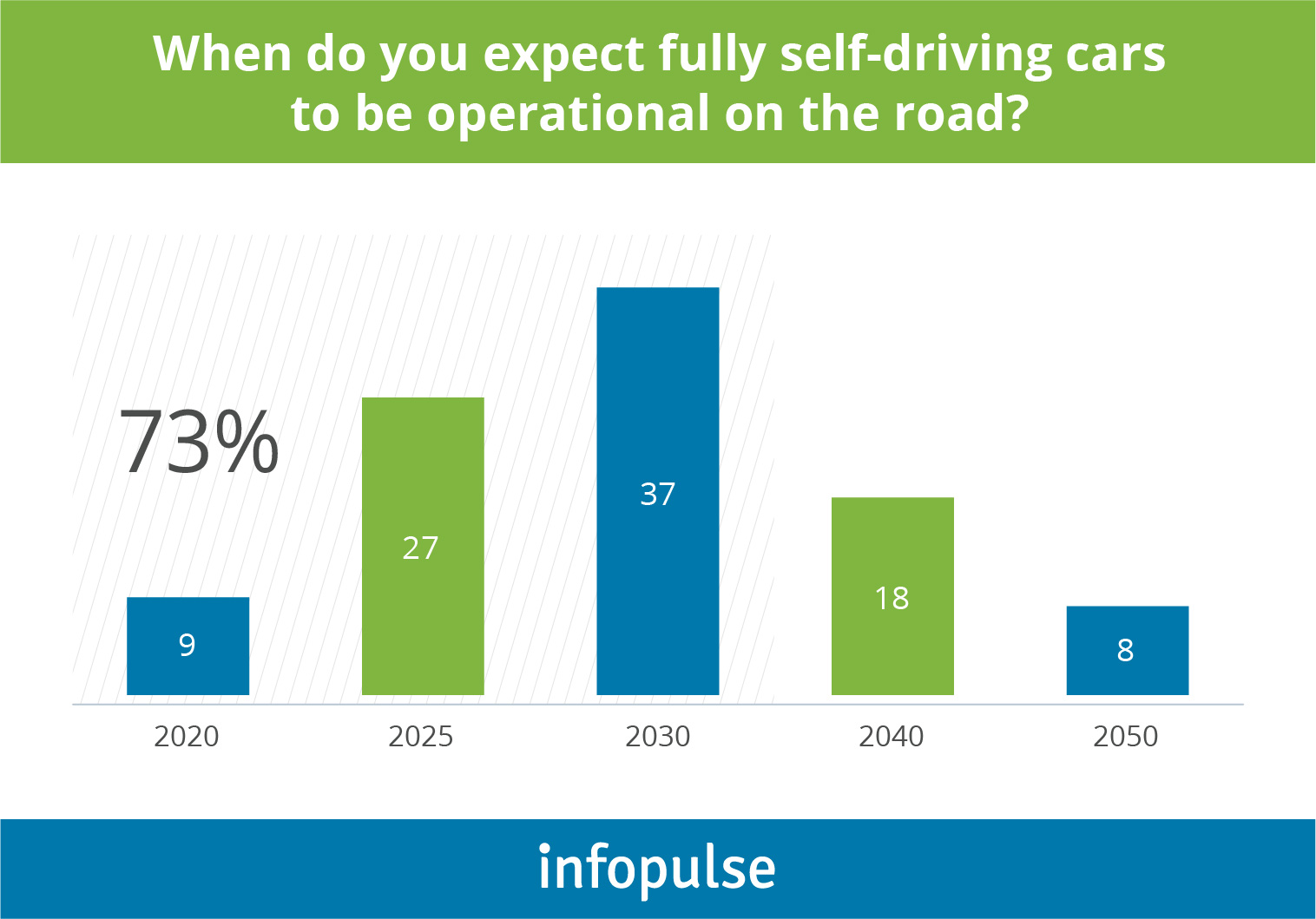 Today, consumers already have a fair share of excitement for autonomous vehicle technology, according to the Adobe survey:

OEMs and regulators, however, share a more cautious sentiment regarding the mass-adoption of self-driving cars. KPMG survey indicates that 71% of execs believe that autonomous and non-autonomous vehicles (unless separated on the roads) will create severe safety hazards.

Before self-driving cars hit the road in the 2030s, the driving ecosystem will need to undergo an array of transformations:

Toyota, for instance, plans to test this concept in action during the Tokyo Olympic Games 2020. The OEM plans to deploy its Level 4 self-driving electric vehicle fleet to drive people around the Olympic village.

A few years ago, Ford hosted a trial self-driving pizza delivery with Domino’s along with a series of other demos, illustrating how their autonomous vehicles will function. While, Renault is running late-stage trials for its purpose-built electric, autonomous, shared vehicle model – Renault EZ-GO – that is planned to become part of their car-sharing fleet in several years.

In fact, autonomous carsharing and MaaS (mobility-as-a-service) offerings will generate a significant share of revenues during the early stages of autonomous rollout. First of all, the operational costs decrease as you no longer need to pay any driver’s salaries or have people rerouting shared vehicles to the requested parking space and/or back to the garage for maintenance (the car can drive itself).

KPMG estimated that half of the cost of hiring an on-demand private vehicle relates to the driver and their availability. Connected autonomous vehicles provisioning is cheaper to orchestrate and such fleets are less expensive to run (as an OEM) and use (as a customer). The same survey says that autonomous MaaS services can end up being 40% cheaper than private car ownership. With declining car ownership, OEMs, who ignore the MaaS space, become at risk of losing their customer bases to savvier tech players (Uber, Lyft, Alphabet).

BCG group predicts that by 2030, as much as 25% of all the miles driven in the US will be in shared electric self-driving vehicles that will come to replace traditional cars starting from the late 2020s.

At present, the shared mobility sector is already cutting into OEMs revenues, as more and more consumers in established markets give preference to “renting” versus “ownership”.

Beyond that, the US has become a hotbed for CASE innovations. Between 2014 and 2018, the investment levels in CASE tech increased sevenfold, signifying that different players are gearing up their forces to enter the new era of mobility and unlock additional revenues.

Accenture estimates that by 2030, new mobility services will be generating over €1.2 trillion in revenue for OEMs. 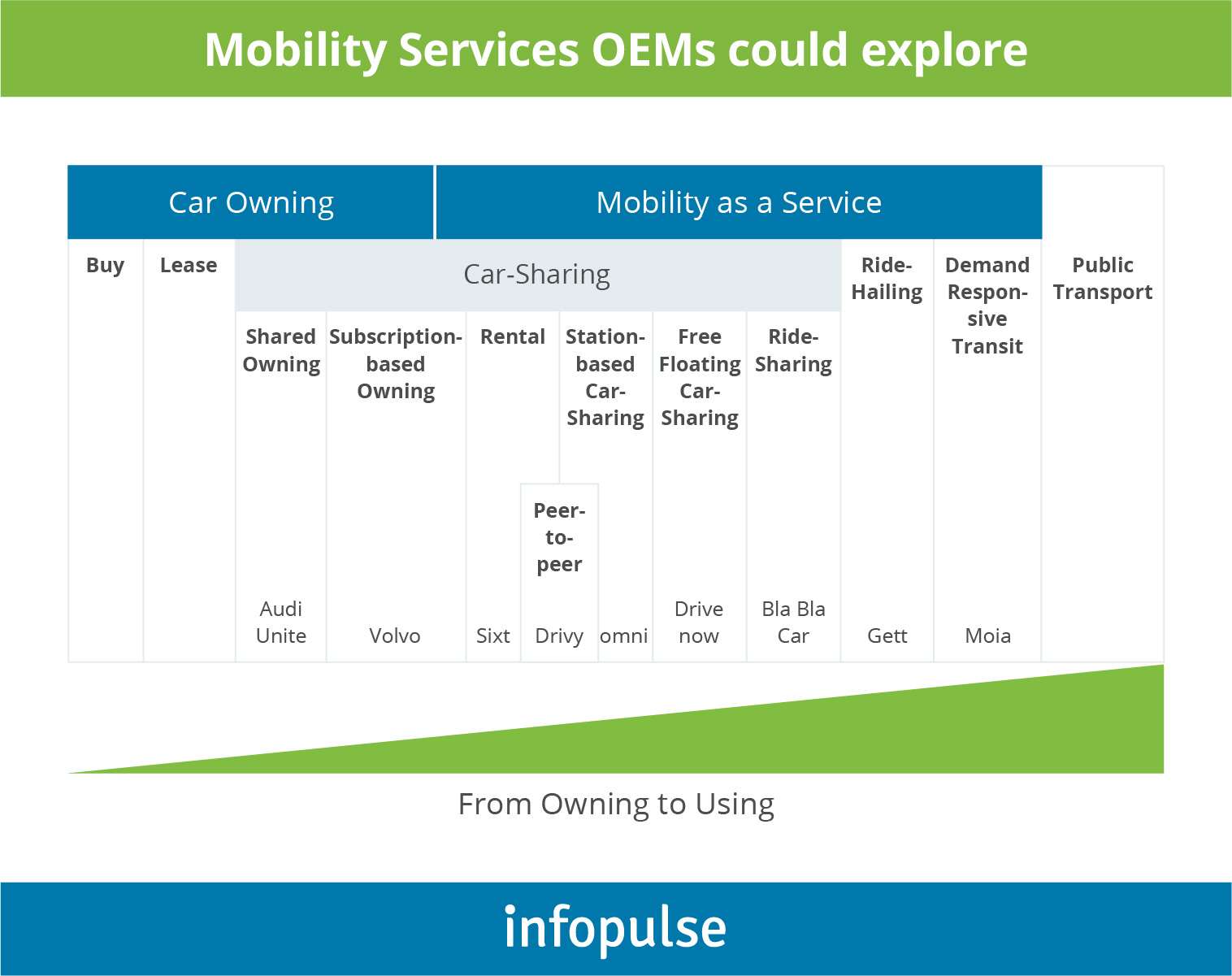 Greater connectivity, autonomy, and electrification are key enablers for this brand new era of MaaS and “servicetized” offerings from automakers.

On a global scale, EV battery costs can be reduced to as low as $150-$200 per kilowatt-hour, putting electric vehicles within the same price range as traditional cars. Electric vehicle charging stations are also multiplying in numbers as EV OEMs strike new partnerships deals with other businesses and governments.

Lastly, the so-called “green policies” make e-car ownership even more attractive to consumers. Many countries offer competitive tax credits to owners, along with other perks. In 2019, roughly 50% of consumers in the US said they’d be interested in owning an EV someday, while 28% plan to purchase an electric car model next.

Beyond the direct purchase interest, consumers are also largely favoring electric car-sharing services. In fact, 35% don’t mind paying extra for a ride in an EV. Adding more electric vehicles to a car-sharing/ride-sharing fleet also makes sense for another economic reason: EVs usually have 20-40% lower maintenance costs over 5 years when compared to traditional cars.

Getting on the CASE Trend

Within the next decade, tech investments will determine which OEMs will remain among the market leaders and thrive in the new landscape of shared mobility, multimodal journeys, and autonomous applications.

Become one of those leaders with Infopulse automotive expertise and our help in CASE megatrends adoption. Contact us today to tap into a number of opportunities with an ASPICE v2.5 certified IT provider.