Blockchain as a Guiding Light for Government Services

Originally published: February 28, 2019 Updated: May 12, 2022 7 min. read Innovations
Blockchain has the potential to destroy the old-fashioned bureaucracy and pave the way to a more unified and convenient framework of relations between the citizens, businesses and the state. Experimental governmental blockchain projects have already been implemented and reportedly received positive feedback in the UK, US, Canada, Brazil, India, and China.

Blockchain may be used to register, store and share information without leaving any traces. This promotes transparency and reduces the chances of fraud and cybercrimes. With its help, governmental institutions may get rid of the unnecessary red tape and decrease their dependence on intermediary organizations. In a broad sense, blockchain creates an opportunity for a clear and collaborative environment, where any type of transaction friction is excluded, and the government begins to function much more efficiently.

Digital identity is an integral part of the modern world. The overwhelming majority of people are subdivided into an online and offline version of themselves, and mostly they struggle to draw the line between their publicity and privacy. To be sure that both online and offline versions of themselves coincide, people are required to prove their identity. During the verification process, personal data may be leaked and stolen by identity thieves, who are commonly referred to as cybercriminals. Its common knowledge that any centralized system that processes vast amounts of personal data is constantly threatened by cyberattacks and today cybersecurity is of vital importance for any governmental process.

One of the possible solutions is to choose a particular data authentication method that removes the necessity for the service providers to keep the user’s credentials. So people who want to be presented online, but keep their personal data safe need a useful alternative – which is blockchain.

Distributed ledger with a cryptographic validation algorithm is an effective solution to verify the person and keep his data safe. Blockchain-based electronic identity may even be used as a sort of passport that ensures secure data transfers while granting access to a wide range of different services. 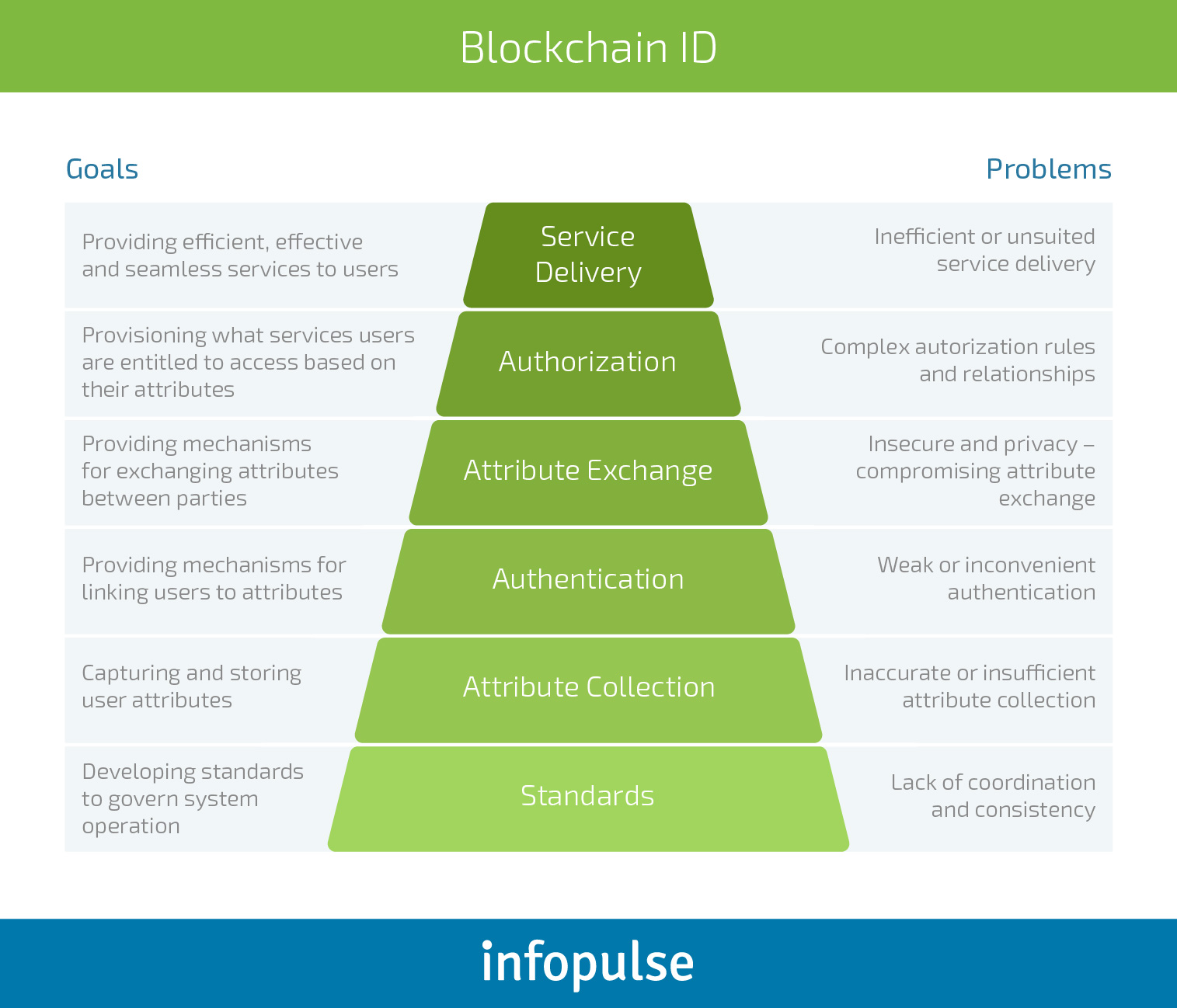 Public Services Based on Blockchain

The governmental public service sector could receive great benefits from using blockchain. Outdated software systems and extensive paperwork can be easily replaced with blockchain technologies and increase the public services work efficiency while abolishing the slightest chances of corruption and any types of fraud.

In different parts of the world, the concept of blockchain-based e-government is being actively implemented. For example, the Estonian government began to issue electronic ID cards that allow online identity-based services like banking, company incorporation, and taxes.

Estonian e-residency program has attracted more than 20.000 participants, the majority of whom are willing to conduct location-independent business and using the country’s infrastructure. Some have moved their business to the country due to the program, and others are using it just to experience the benefits of secure authentication. The program has proven to be extremely effective, it has received €14.4 million in income in 2017, and over €13 million in net indirect socio-economic benefits. By 2021, the number is expected to increase to €31 million. Moreover, Kaspar Korjus, the e-residency lead of Estonia has stated that they want to expand the program and make it available for worldwide usage.

Another crucial technology that was implemented in Estonia is the Keyless Signature Infrastructure (KSI). This structure stores governmental data on a secure blockchain platform that ensures its privacy and authenticity. This platform supports all of the obligatory governmental processes while assuring the needed transparency. Here are some examples of the most vital transformations made by the platform:

The governmental executives who begin adopting blockchain suggest that it will greatly decrease the time used, and the risk probability in terms of regulatory compliance. The data is utterly immune to falsification, and all of the registered activities may be tracked and verified for authenticity. Currently, regulatory compliance is mostly enforced with spot inspections, and the results may be muddle up, resulting in excessive compliance rules for honest companies.

Blockchain has the potential to create a “reputation for business”. Entrepreneurs will have clear access to the current compliance rules and will be able to view the newest updates. On the other hand, governmental institutions will use transparency to outline trustworthy companies and detect the violators.

Recently the Monetary Authority of Singapore has introduced a nation-wide KYC (Know Your Customer). This is a utility that improves data verification when people apply for licensing activities. The advantages of this utility are:

The majority of people tend to describe the government as inefficient, which could barely provide any services to them. Blockchain is capable to create the transparency that would help to identify different types of issues and let functionaries take the needed action. A very simple example –electricity in your house disappeared, and you won’t have to make any requests and waste a lot of time waiting for the response. Blockchain system will automatically notify the electricity company by itself. Most importantly, blockchain allows conducting smart contracts with the government, and review the contracts execution and detect possible violations. With its help, government bidding would be crystal clear, without any chances of successful fraudulent practices.

On an individual level, blockchain-based contract management may exclude certain disputes between the authorities and the citizens, for example on issues concerning property or vehicle registration. The audit and tracking of property ownership become more convenient and explicit. Ownership issues may be settled within a matter of minutes, and in due course become eliminated entirely.

The Netherlands has also implemented a series of efficient blockchain governmental projects. The Dutch legal system was improved, just like in the case with Estonia. The Dutch government began using blockchain technologies for exchanging information during criminal procedures. The participants can no longer temper the procedures because every side has access to the relevant case evidence.
Another branch where Dutch people have successfully used blockchain is healthcare. The application allows storing and exchanging different data, while also indicating who will be in charge of certain activities and whether he has the powers to do so, or not. Essentially, the administrative processes became more efficient, and now every citizen is in full control of his personal healthcare information”. 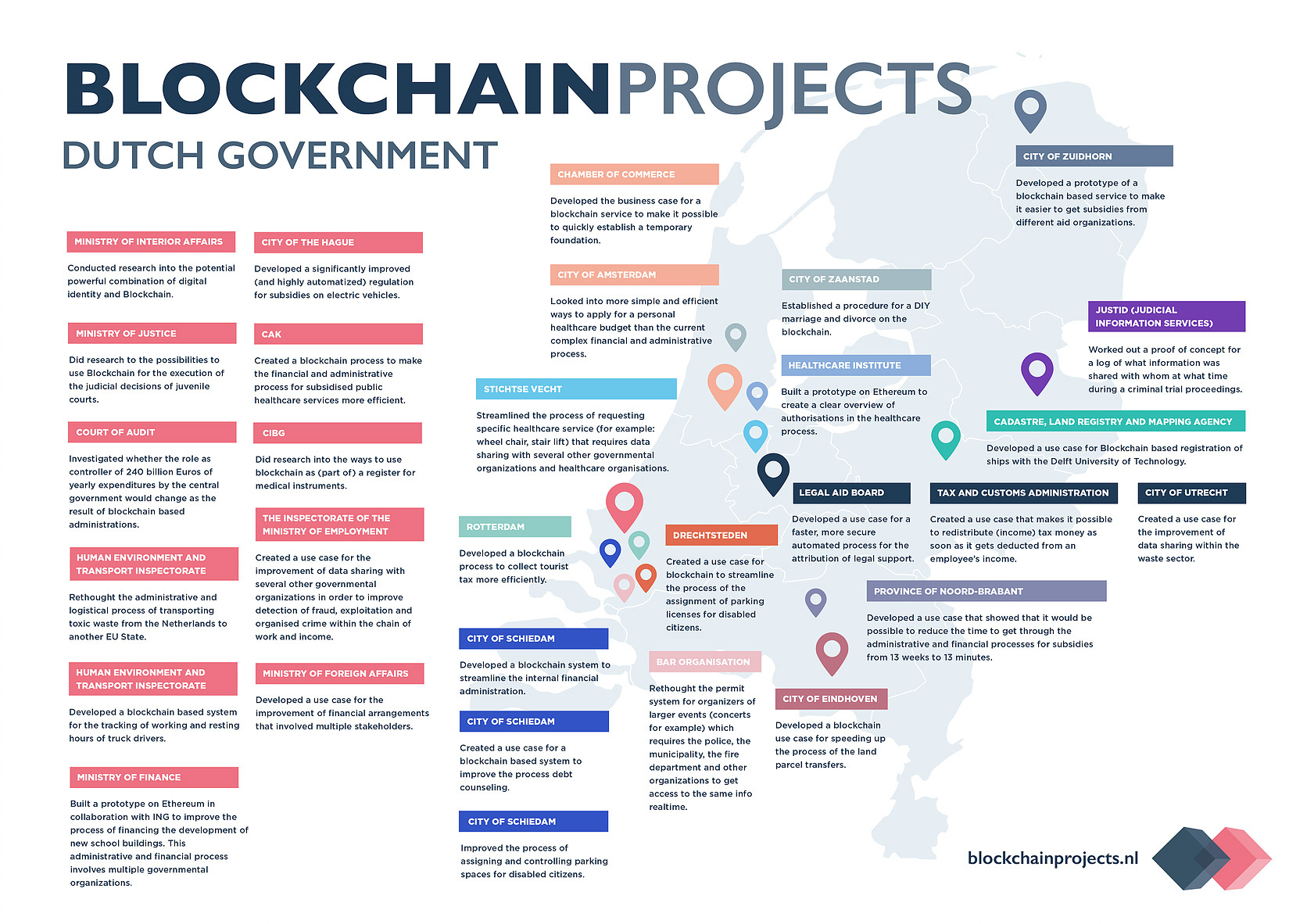 Other Striking Examples of Blockchain in the Government Services

A decentralized blockchain-based e-auction allows the buyers and merchants to freely participate in trade without any limitations being placed on them by the central bodies. The benefits would be gained from registration fees and additional services provided to the users. Any kind of action – payment confirmation, lot creation, registration or bidding is distributed to every member by a source protocol. This kind of distribution allows real-time bidding from a wide range of merchant platforms. Additionally, the blockchain proof-of-payment prevents Sybil attacks or any other kinds of cyber threats. In some cases, the participants need to guarantee the deposits, and then every payment will be approved by an integrated API. The e-Auction is a radically new approach to commerce, which unites the participants across the globe and allows secure and transparent trade with governments or individuals in a blockchain-documented system.

E-VOX is a project that is designed to promote e-voting and e-democracy. E-VOX owners took part in EGAP, which is a competition among civil projects developed to promote e-democracy, which was organized and funded by the Ukrainian and Swiss governments. E-VOX won a grant and began to test the e-petitions tool. After successful testing, the owners launched the E-VOX:NaRada, which is a license-free voting system for the city council. This application allows the citizens to observe voting in real time and allows to view how the deputies implement their mandates. The project is soon to be tested in one of the Ukrainian cities and is planned to be expanded into a nationwide blockchain peer-to-peer network. The network will not only process nodes, but also national and local registers, and other information related to e-government.

Remme is a project that brings the public key infrastructure into blockchain and excludes the need for passwords. Remme is based on asymmetric encryption with a kit key length, which is ultimately secure and doesn’t have to be memorized. The SSL certificates used in the project also protect the channel from the man in the middle (MIM) cyberattacks, where the hacker tries to alter the communication between the two participants. Moreover, Remme has a two-factor authentication and functions without a central server, which makes it immune to cyberattacks. Remme accounts have a simple management system and can be used on any device: desktop, mobile etc.

Drawbacks of Adopting Blockchain in the Governmental Sector

Despite having obvious advantages, using blockchain in governmental projects also has certain risks. There are certain challenges in terms of authentication because identifying users still often requires a trusted third party participant. The third party must audit sensitive information of the user so that the ID is verified.

The major issue with voting is that it’s hard to identify whether it belongs to a certain person. Furthermore, blockchain makes the votes transparent and easily accessible, so there’s a risk of vote selling. Transferring “vote coins” could tempt the people to sell votes, and since they are anonymous, no one would be able to trace the votes and prove their legitimacy.

Governmental blockchain projects may also face particular security issues. Although the system is based on the Elliptic Curve Digital Signature Algorithm (ECDSA), so the key is crucial for validation, and if it’s stolen, the hacker will possess your identity.

Blockchain has certain faults, yet it has proven to be an effective alternative to the conventional centralized governmental system. The two major advantages of blockchain governmental projects are transparency and safety. The data used by individuals is encrypted and secure, it promotes virtual identity privacy and authenticity. Blockchain also makes court procedures less time-consuming, improves cybersecurity efficiency and helps to combat crime. Blockchain has the potential to revolutionize the work of the governmental sector, make it clear, secure and efficient, thus providing benefits to both citizens and the authorities.

Want to trial-test blockchain for goverment services? Contact us to create a proof-of-concept together with you!