Originally published: December 11, 2017 Updated: January 27, 2022 9 min. read Software Engineering Cybersecurity
Improving the road safety – that is an ultimate challenge, might be finally solved by extending the car’s autonomy. By enabling interconnection between various types of vehicles and connecting them to a powerful computer network, the leading car manufacturers intend to transform the concept of driving. However, this major shift from a mechanical system of a conventional vehicle to an always-connected car raises a plethora of automotive cybersecurity concerns.

In the first part of this article, we will discuss types of potential threats present in the connected vehicle ecosystem and the reasons why automakers should make automotive cybersecurity their priority.

From Connected Car to Self-Driving Vehicle

Trends are evolving at enormous speed. Seems like only yesterday we saw a hype over the vehicle connectivity. Based on Advanced Driver Assistance System (ADAS) and In-Vehicle Information System (IVIS), connected vehicles are designed to help drivers feel more secure and comfortable on the road. A connected car can talk to other vehicles in the wireless local area network influencing own driving behavior and informing other cars about its position, speed, brake status, etc.

Now, we’re seeing a major trend to shift from the assistance and connectivity features to self-driving cars. And this is how the driver’s seat will soon turn to the passenger’s. More and more electric and hybrid electric vehicles implement partial and conditional automation per SAE J3016 International Standard, as seen in the illustration below: 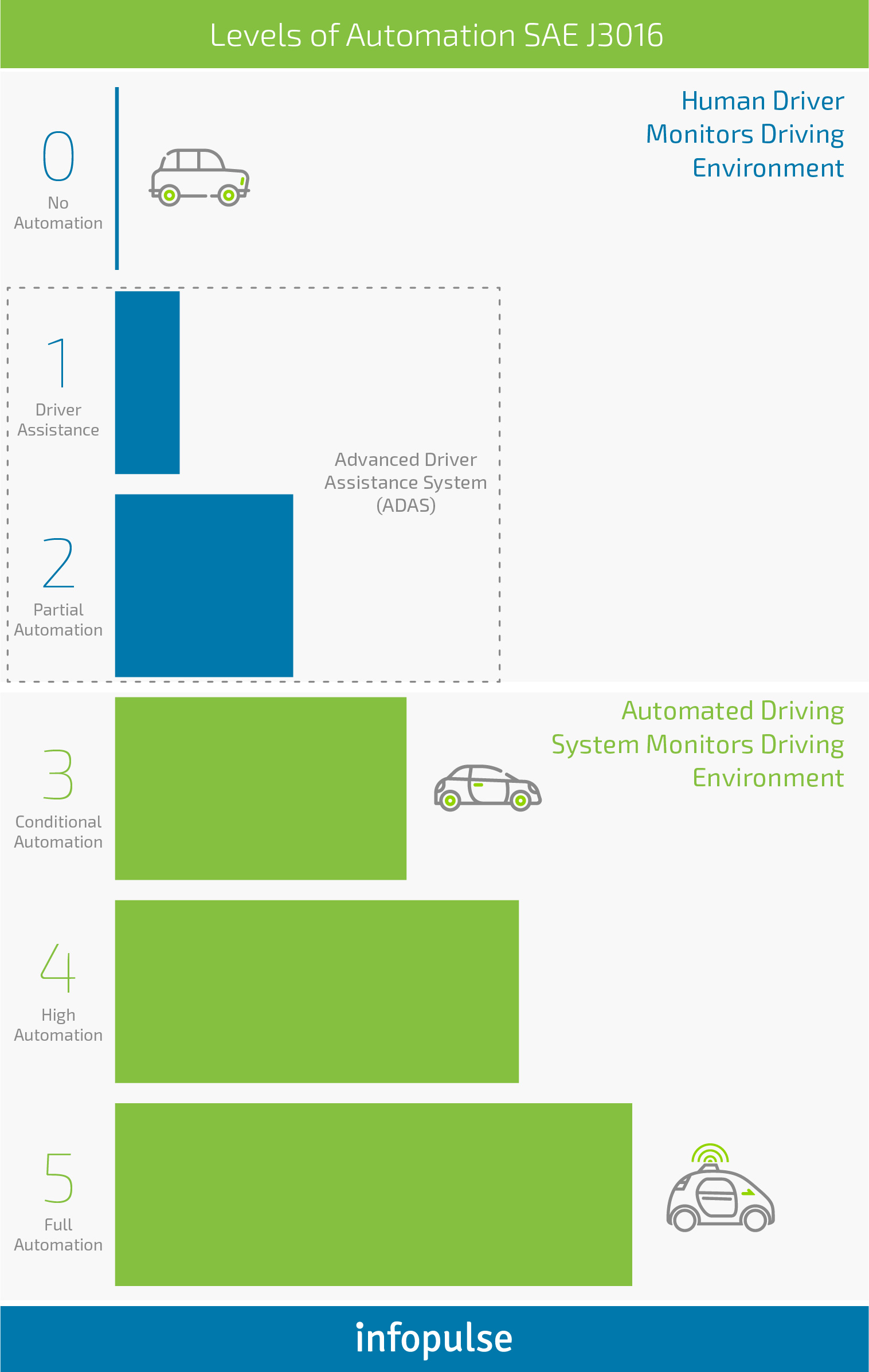 Level 3 (“hands-off”) and Level 4 (“eyes off”) of autonomy are already present in Tesla vehicles, Google’s Waymo Pacifica, Volvo Drive Me S60, Audi A8 Luxury Sedan, and others. Many manufacturers aim to achieve the complete Level 5 automation when the car is able to drive any road just like the human driver. This, however, won’t be possible until after 2021 at the earliest, while some sources predict not earlier than 2025 for full car automation.

Anyway, the tendency to implement connectivity features is growing exponentially as it promises considerable profit to automakers. As projected by BI Intelligence, 380 million of connected cars will be present on our roads by 2021. The estimated revenues from the purchased connected car packages in 2022 are predicted to reach $155.9 billion, according to another report by PwC. 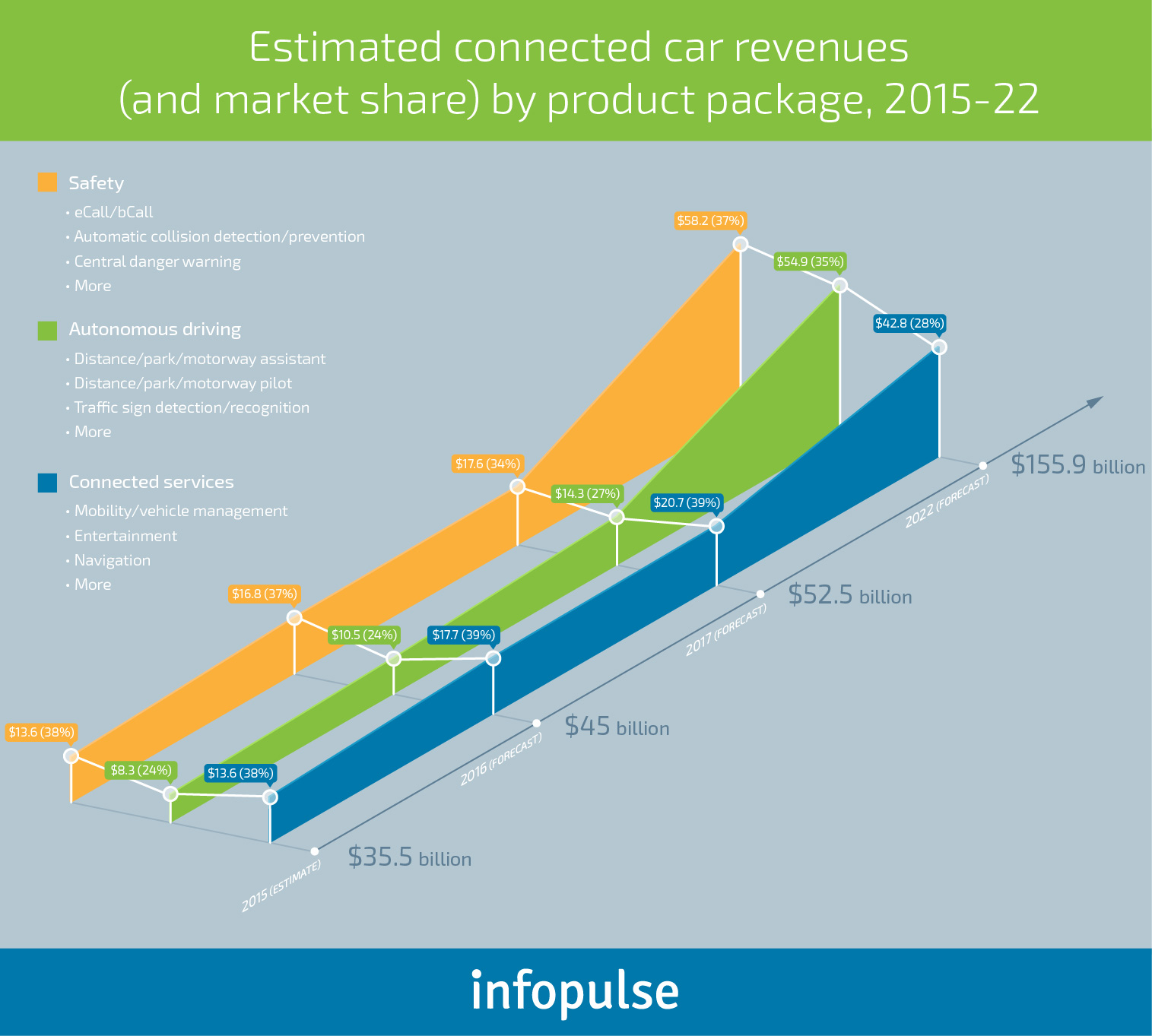 Based on V2X communication, ADAS, IVIS, Internet of Things, Machine Learning, Artificial Intelligence and many other evolving technologies, a connected car becomes smarter and, thus, a more desirable product for end users. However, despite being able to predict and prevent accidents and collisions, the connected cars may be vulnerable to cyber attacks, making autonomous cars cybersecurity the most important challenge nowadays.

Generally, automotive cybersecurity should focus on three main trends adopted in a connected vehicle according to TU-Automotive report:

Evidently, by inheriting multiple features of a computer on wheels, a connected car becomes more unprotected. As seen from the abovementioned examples, even some acclaimed car brands like Tesla cannot fully guarantee driverless cars cybersecurity today.

The new driverless technologies and connectivity trends are still evolving. Naturally, cybersecurity experts, as well as common users, have numerous concerns. According to the University of Michigan research, American drivers are concerned about hacked self-driving cars that may cause crashes, serve as weapons for terrorists, and leak their personal data. At the same time, according to IDC research, 50% of British and 57% of German drivers are extremely concerned about connected car applications, such as Adaptive Cruise Control, Collision Avoidance System, and Self-Parking. 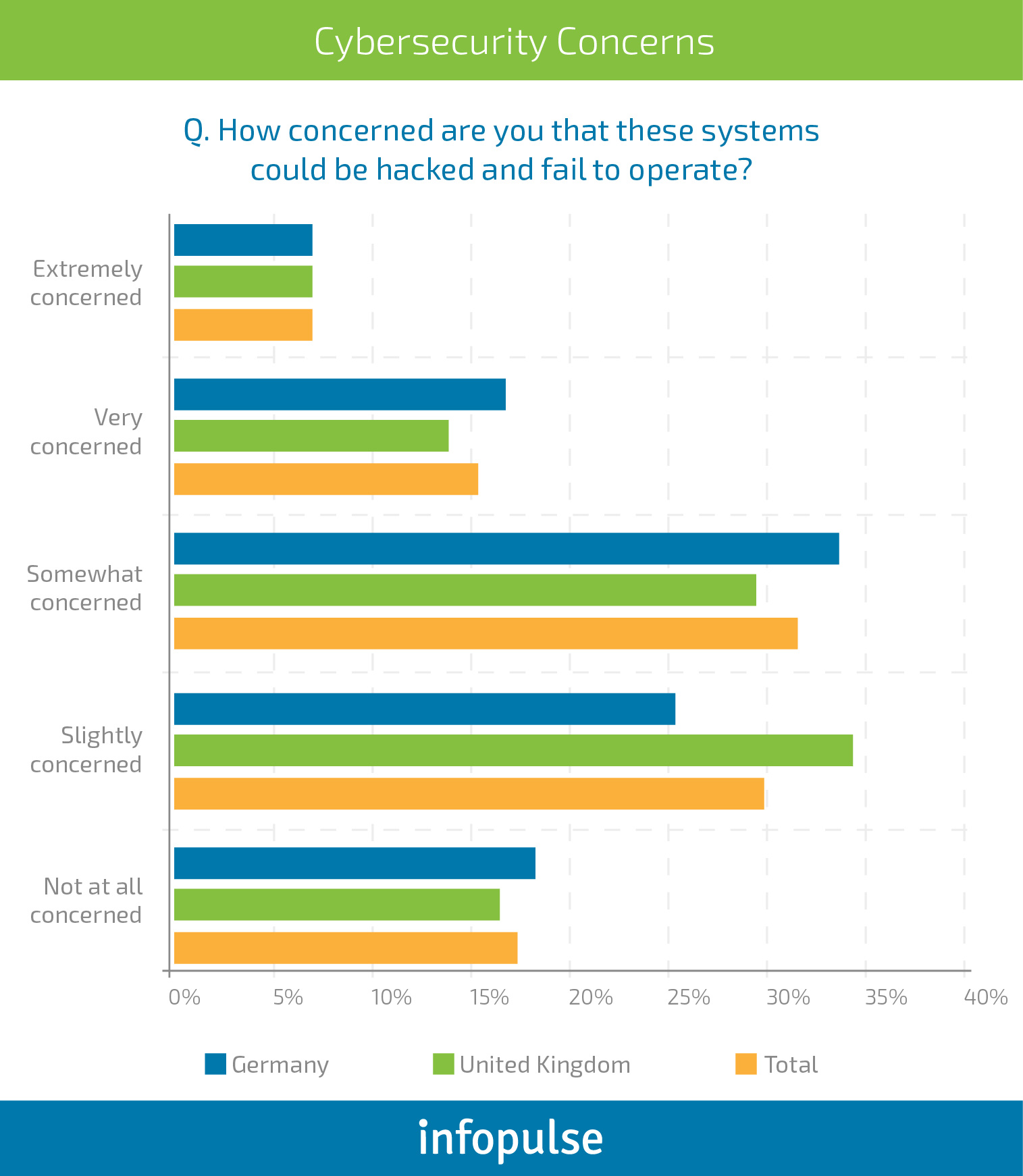 Drivers do have reasonable grounds for such concerns. In 2015, two white hat hackers Miller and Valasek got a remote control over Jeep Cherokee via the Internet. This incident made a great stir, forcing Fiat Chrysler recall 1,4 million of vehicles for maintenance. This year, Chinese researchers compromised the security of Tesla Model X uncovering some serious vulnerabilities to be patched. The group of experts remotely opened the car doors, trunk and turned on brakes by using Wi-Fi and cellular connection.

The good news is that Tesla, GM, Fiat Chrysler and other carmakers realize the importance of cooperation with professional hackers and have started their own “bug bounty” programs. E.g. Fiat Chrysler Automobiles offers a reward of up to $1,500 per bug.

Pursuing to add as many new connectivity features as a consumer will buy, manufacturers offer a wide range of ADAS safety packages. Nonetheless, many of them provide low-tier if barely any security. The array of new functions and services has created so many attack surfaces, that protection needs a more serious approach.

According to the aforementioned Miller and Valasek’s report, a hacker should get through three stages to perform a successful remote attack:

To know how to protect a connected car from unexpected penetration you should understand the nature of attack and types of vulnerabilities frequently exploited by hackers.

Things to Protect in Cars on Cyber Level

While there are numerous attack vectors, McAfee lists fifteen the most hackable attack surfaces as shown in the diagram below: 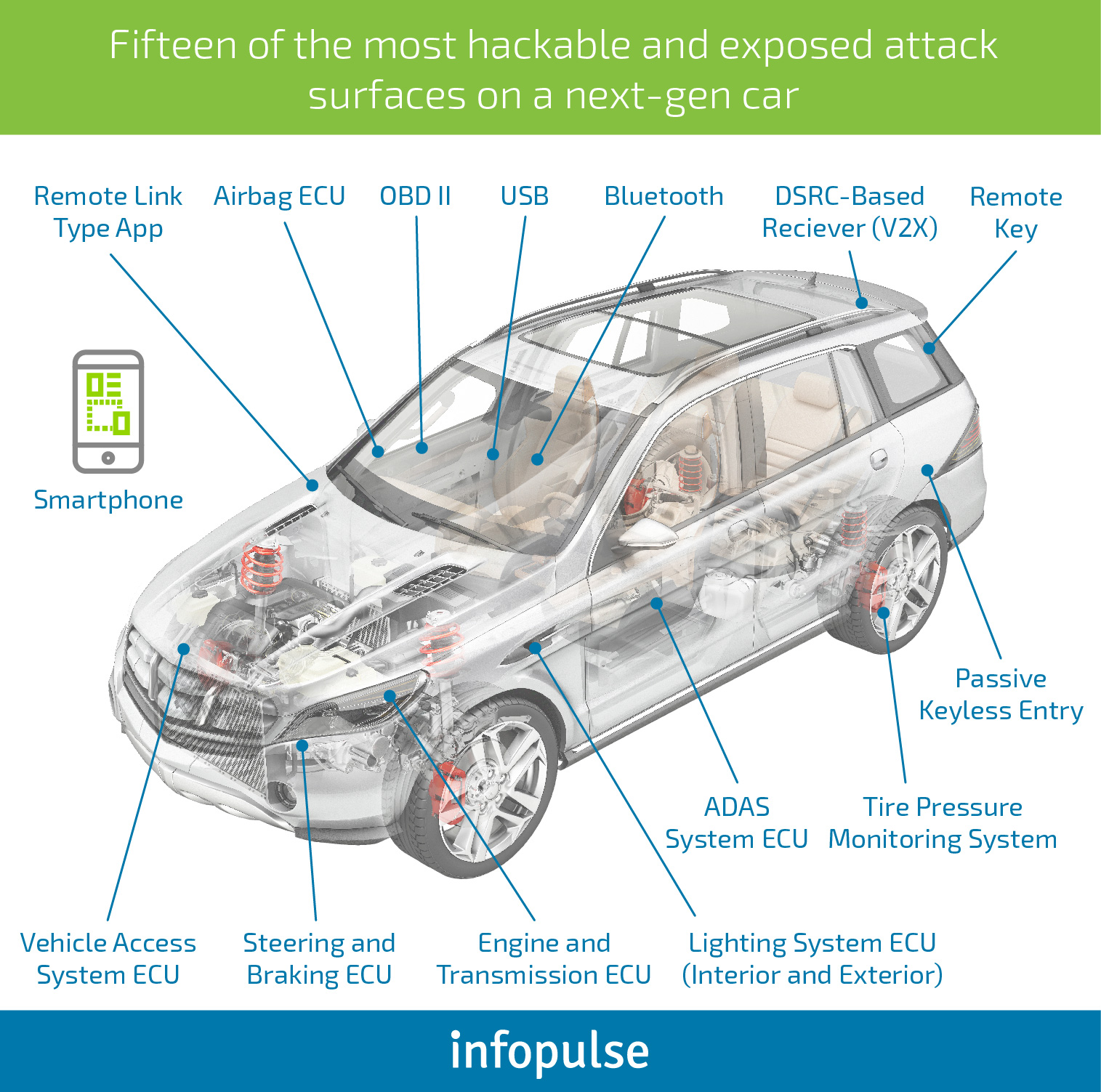 Unfortunately, even after strengthening the described key channels, the connected car cybersecurity is still exposed to many vulnerabilities. Due to the complicated modern vehicle infrastructure, the attack surface expands to 50 entry points according to SBD Automotive report. As a result, today the underdeveloped automobile cybersecurity system can imperil a driver or his personal data from different attack vectors illustrated in the figure below. 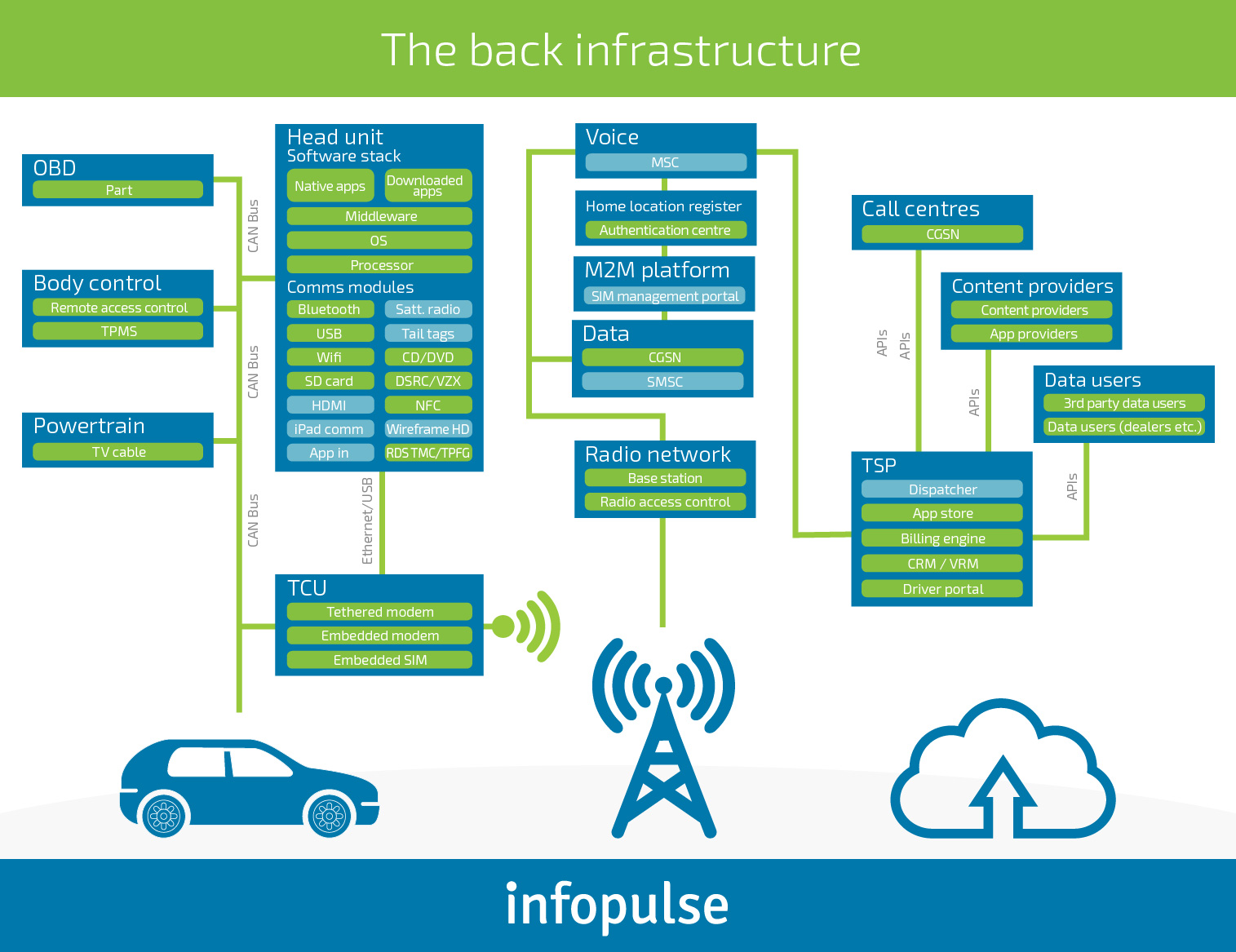 Regarding the scale of a topic, the first part of an article can be viewed as an outline of connected car features, main trends and technologies applied in the modern vehicle, specific concerns raised by drivers and cybersecurity experts as well. We have also highlighted major attack vectors and other possible entry points confirming the fact that a connected vehicle aimed to improve safety on the road obtains a low level of cybersecurity. To enhance and protect a modern vehicle from potential cyberattacks, the automotive community has developed best practices and innovative solutions reviewed in the next part of this article. Follow us to get more details and valuable insights.