The Current Regulatory Landscape of Blockchain

Blockchain may be efficiently implemented to benefit almost any industry. The nascent technology offers a broad spectrum of advantages, like cost-efficiency, additional revenue sources, improved transparency, and prevention of fraud. In comparison with previous years, the total cryptocurrency market cap is steadily growing, having reached $215 billion in 2018. Today, blockchain has expanded to an extent that can no longer be ignored by regulatory authorities.

Considering the advantages of the emerging technology for the business and governmental sectors, today legal authorities are gradually adopting blockchain-friendly regulations. In essence, regulators are now beginning to acknowledge blockchain transactions and records as legally valid, having equipollent significance to conventional payment methods. However, some countries still struggle to issue laws and regulations that will accelerate the development of blockchain. So what is the current regulatory landscape of blockchain around the world, and what does the future hold?

Blockchain Regulatory Environment in the US

The federal government chose not to engage in regulations related to blockchain technology, so now the laws are left up to the regulatory agencies of separate states. For the past few years, a number of states declared that they were working on regulations that support blockchain, and some already promulgated the beneficial laws.

In March 2017, a blockchain record recognition bill was passed in Arizona. The law views any blockchain-based contract as valid, including the electronic signatures, smart contracts and ownership rights secured by the technology.

The state of Delaware has always been a flash point for legal disputes that concern security. When acquisitions or bankruptcies occur, numerous court cases are required to determine which investor has valid claims. Such cases include extensive and time-consuming paperwork, which results in predisposition for errors and fraud. New regulations now allow Delaware registered enterprises to use for recording and storing all investment-related transactions and uniform commercial code fillings on Blockchain. These smart records will be recognized as valid in any Delaware court.

Maine, Vermont, and Nevada have enacted supportive laws that recognize blockchain records as valid. Moreover, in Nevada, the authorities have issued another bill that makes all of the blockchain transactions tax-free.

Today an increasing number of the US state authorities recognize the benefits which blockchain can bring to both public and private enterprises. Blockchain creates a protected environment for recording and storing property titles, healthcare records, identity documents and contracts between individuals and businesses. Nevertheless, the federal government is reluctant to accelerate the adoption of laws that support blockchain, and the policies continue to be issued only by separate states. Here is a more detailed map of blockchain regulations in the US. 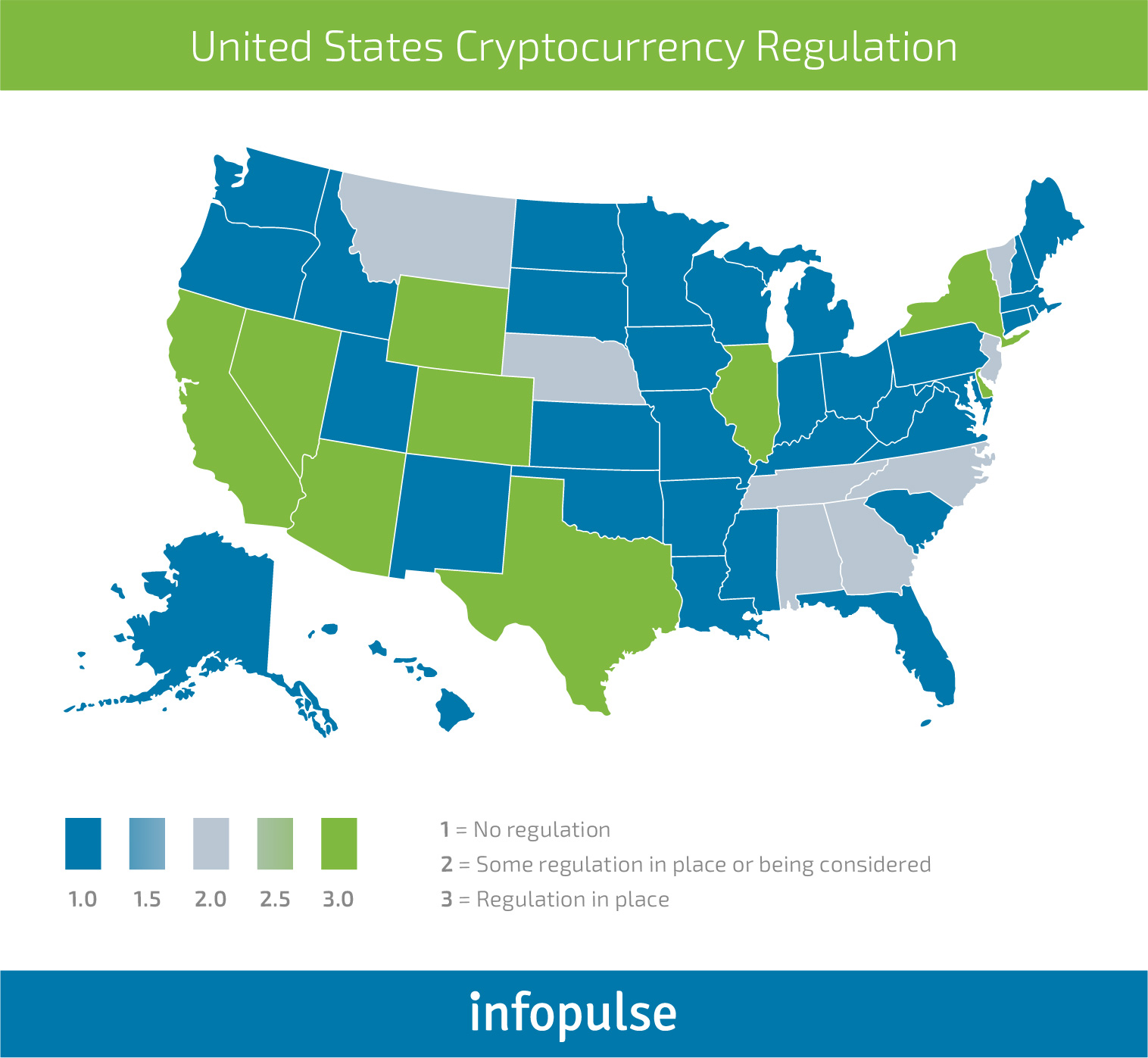 Blockchain Regulations in the European Union

The governing bodies of the European Union have a welcoming attitude towards the development of blockchain and the distributed ledger. Such approach is beneficial for the overall blockchain expansion because the encouraging regulations spread through 28 EU member states. In 2017, executive branches of the EU have announced that they are displaying an initiative to support a number of projects that include blockchain-based transactions and relationships between citizens, governments, businesses and public entities.

ConsenSys – a software company that specializes in creating blockchain-based infrastructure and applications in the Ethereum ecosystem, will cooperate with the EU executive agency on the Blockchain Observatory and Forum. Moreover, the executive agency plans to increase the blockchain funding to €340 million by 2020[/seohide]. Most importantly, apart from significant encouragement from the EU governing bodies, separate member states continue to issue additional regulations that are beneficial for the blockchain development.

In 2016, French authorities have adopted a law that allows debt-based instruments, negotiable debt securities, and unlisted equity securities issued by joint stock companies, to be issued on a blockchain platform. France was the first country to introduce a legal framework that allows transmission and representation of securities on the blockchain, and the authorities now encourage nationwide use of the platform.

Zug, a town located in the very heart of Switzerland is now termed as the “Crypto Valley” due to large amounts of investments specifically in the blockchain sphere, and the town is a principal place of business for many prominent blockchain startups. The Swiss Federal Council has adopted a range of supportive laws and now blockchain is widely used in a range of financial transactions, and city fees in Zug can be paid via cryptocurrencies.

The Ministry of Finance in Estonia does not place any obstructions on the use of cryptocurrencies in payment transactions. In fact, Estonia has one of the most progressive views in terms of using blockchain, and its e-residency program attracts crypto entrepreneurs from all around the world to set their business in Estonia. The country issued a number of favorable taxation laws for blockchain companies and startups, and now the authorities are developing the first national cryptocurrency – ESTcoin.

The UK government views cryptocurrencies as legal tenders, and the assets are treated as foreign currencies. The authorities recognize the potential of blockchain technologies, and the countries actively use them to reduce the rates of fraud and corruption, as well as to decrease excessive paperwork. InnovateUK, a part of the UK Research & Innovation Organization that focuses on funding emerging technologies, has invested in a range of blockchain projects and startups that develop solutions for cross-boundary financial transactions.

The Future of Blockchain in the EU

The European Union executive agencies recognize the true potential of blockchain technology and the benefits that it may create for the financial and the governmental sector. That is why the EU authorities have a supportive approach towards the use of blockchain, and legal bodies adopt encouraging laws all around the EU. In the nearest future, the pursuit of flagship blockchain projects will have a beneficial effect on the EU economy, because these projects will improve the internal commerce market for innovative entrepreneurs and encourage fund clients to invest into local projects.

The authorities are likely to foster blockchain innovations by studying its ecosystem and providing relevant information and valuable insights to the entrepreneurs, developers, and stakeholders on the specifically organized events, like the EU Blockchain Observatory and Forum. The next steps that the EU governing bodies will soon take are – creating a unified legal framework that complies with the GDPR and provides a clarified legal and financial status for cryptocurrency tokens, and outlines the rules on the exchange of crypto assets.

The world is slowly beginning to understand that the blockchain has the potential to benefit many industries. Some authorities are cautious about the emerging technology, and are reluctant to adopt supportive laws, while others recognize the advantages of the blockchain, and continue to issue favorable legislations. Yet, there are numerous legal challenges that need to be resolved to further advance the expansion of blockchain technology.

If we consider datasets, there is a conflict that concerns intellectual property between the entrepreneur who wants to capitalize on anything commercially valuable from the blockchain platform, and the user to whom this shared dataset relates. In common software development settlements, these issues are directly outlined and agreed upon between the agreement participants. The same approach could be applied to blockchain projects where the parties should consider the value of the dataset, and whether it can be traded with any external agents. By the means of cooperation between the user and the entrepreneur, both parties may benefit and the datasets may be preserved.

Blockchain is designed as a distributed and decentralized platform where nodes are located in various parts of the world. This specific feature of a blockchain can make it hard to determine the applicable laws. For example, if a fraudulent transaction takes place in a network, then which court of law has the jurisdiction to protect the victim’s rights? The possible solution is to create special dispute resolution mechanisms within the blockchain network, with universal legislation that would apply to every user.

DAO’s are digital online entities that operate via pre-coded rules. These entities are usually used to execute smart contacts and record the activities on the blockchain network. Conventional laws allow organizations to enter legal contracts, to sue or to be sued by somebody in case of legal disputes. The issue is that the legal status of DAO’s is vague, because they may be reviewed as either partnerships, corporations or legal entities. Who or what is claimed in the case of legal disputes? The only possible solution is to establish a strict legal status and a unified framework for every DAO operating on blockchain.

One of the core aspects of blockchain is that once the data is stored on the network, it cannot be easily changed or removed. This aspect may be in direct conflict with one of the pillars of the GDPR law, which is called “the right to be forgotten”. This right enables to erase unnecessary personal data as long as certain requirements are met. The solution may be to keep sensitive personal data outside of the blockchain and store a reference combined with a hash on the platform. This will allow erasing the off-chain data upon request, making the hash and links on the blockchain that are connected to the erased data useless.

One more important aspect of GDPR that may confront blockchain networks is that the personal data that is collected from the EU resident should not leave the European Union. This issue can be easily controlled on a private blockchain network, but not on a public one. The possible solution could be creating a semi-public blockchain network that is accessible by the users but with the nodes located in the EU.

Although some governments are hesitant to accelerate the development of laws that benefit blockchain, many other countries, specifically in Europe, clearly understand that blockchain is disrupting the financial industry and will soon become an integral part of many business models. Nevertheless, certain challenges in terms of legal frameworks remain unresolved, and they will require further advancement of the blockchain technology. This includes the development of dispute resolution mechanisms within the network, the creation of a semi-public blockchain network that would comply with the GDPR laws and more.

Regardless of these issues, governmental authorities continue to develop legal frameworks for blockchain and encourage its development. This support will foster blockchain ecosystems, which will reshape and improve the interactions between the entrepreneurs, customers and the government, eventually benefiting the society.