3 Industries with the Most Edge Computing Use Cases in 2020

Originally published: May 13, 2020 Updated: January 31, 2023 6 min. read Data & Analytics Cloud & DevOps Innovations
With IoT devices coming to the mainstream, edge computing is becoming the technology of choice for supporting the emerging infrastructure of connected devices. According to Analysys Mason, the majority of business cross-industry can expect a 10%-30% reduction in costs from using edge computing and an average operational cost-saving of 10%-20%.

In this second installment, we’ll dwell more on the practical side of things and provide a list of applications suitable for edge computing across three business verticals – automotive, manufacturing, and AR/VR – along with several case studies and early pilots.

For connected, and later self-driving vehicles, to go mainstream latency poses a major challenge. To function effectively and securely, autonomous cars will need to engage in a high-volume of data transmission in real-time. However, even with the arrival of 5G connectivity, the reliability and speed of such exchanges may not be on par with the ecosystem needs.

The emerging C-V2X communication protocol solves this conundrum to some extent. Still, it is the edge computing that could ultimately help scale its adoption and multiply the variety of V2X services for connected cars and autonomous driving.

Nokia, for example, already launched a proprietary MEC (Multi-access Edge Computing) platform, designed specifically for C-V2X protocol. The company promises that this tech could deliver latency below 20ms, along with a flexible deployment model. 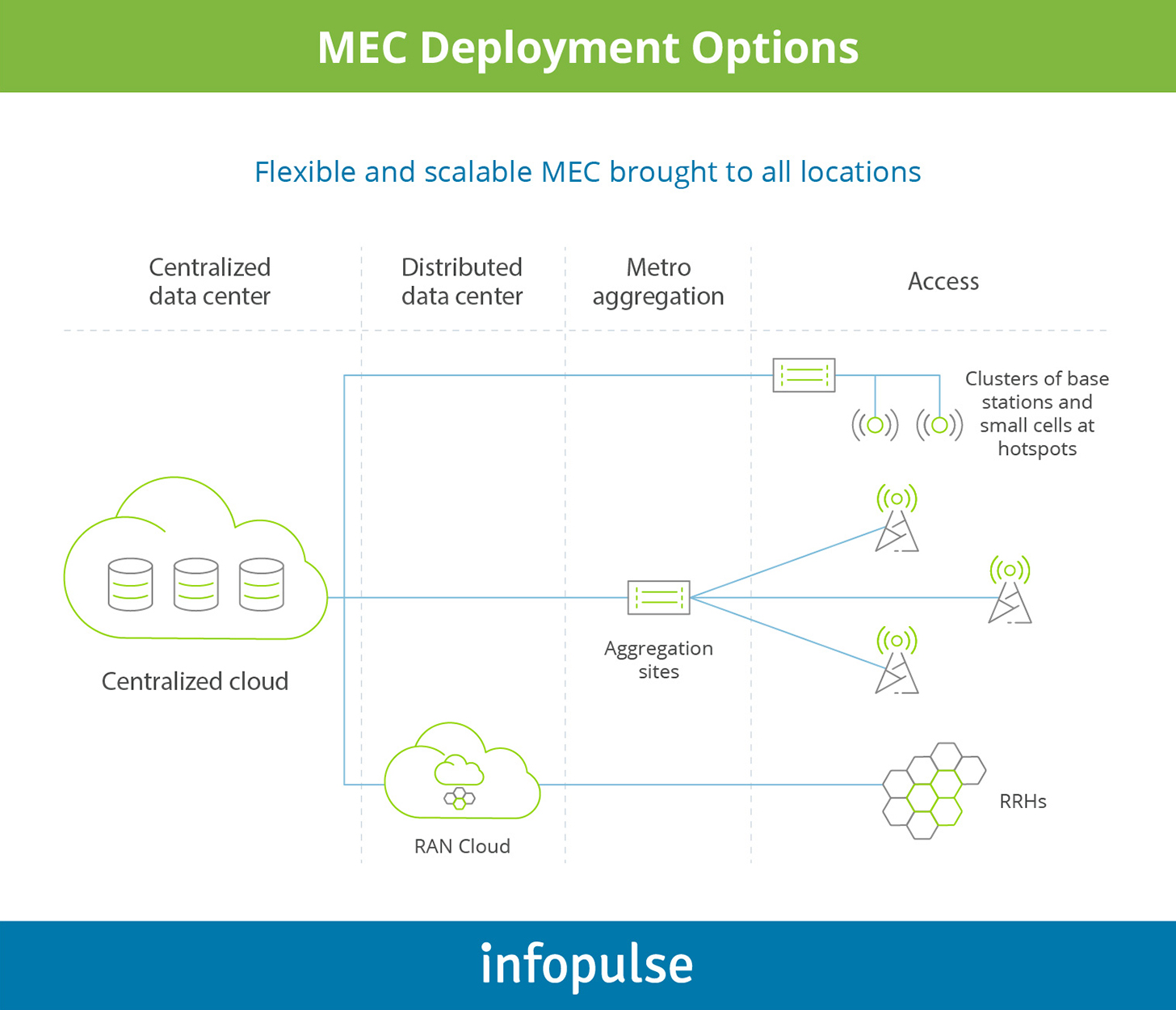 In 2018, Nokia, together with Telefonica Spain, Seat, Ficosa, and SICE, conducted a pilot C-V2X use case demonstration, backed by Nokia’s MEC in Segovia, Spain. During the pilot, a connected car received a real-time alert from a connected traffic light about signal change, plus sent real-time alerts to the vehicle about pedestrians in the driver’s line of sight.

Beyond that, Nokia also:

Some of the additional edge computing applications, currently being explored by OEMs and Tier 1 suppliers are as follows:

To get a better sense of how to deliver an integrated, modern infotainment experience, read our case study, showcasing how our team has created a new embedded system with 3D/2D navigation, advanced HMI with voice control and personalization.

With Industry 4.0 initiatives moving from the pilot stages to mass deployments, industrial leaders are starting to experience speed limitations in data transmissions. Indeed, to support more advanced networks of Industrial IoT devices, and ultimately – fully automated factories, a greater level of resilience, speed and bandwidth is required. Again, edge architecture could deliver that.

Similarly to the automotive sector, edge computing use cases in manufacturing also span across several verticals such as:

Quality testing and inspections: Intelligent defect inspection, powered by AI and neural networks, can ramp up productivity by 50% and improve detection of defects by 90%, compared to human-led inspections. However, network reliability and data processing speed are crucial for such algorithms to work. Edge solutions could deliver just that.

Case in point: Dell recently helped a Japanese electronics manufacturer Daihen Corporation, scale their IoT-powered monitoring with an edge analytics solution. Prior to the deployment, their production process required over 200 manual inspections, occupying 30% of the total production time. After equipping their factory with additional sensors and rolling out a real-time analytics platform, powered by the edge, they saved over 5,000 hours on manual data entry per year.

IMS Evolve, together with Dell, recently deployed a new IoT-connected platform powered by edge computing that helps retailers collect and manage data from their refrigeration systems and building management systems to auto-adjust temperature in line with the standards for food quality, minimize waste and optimize refrigeration costs.

Performance optimization: Equipment downtime is a pervasive manufacturing problem. However, ensuring continuous production is hardly attainable for most companies unless they can gain a real-time view of the equipment performance.

A winning combination of Industrial IoT gadgets and edge computing enables a new level of predictive maintenance capabilities for manufacturers as a recent case study from Intel and GE Digital illustrates.

Intel wanted to boost the performance of its fan filter units (FFUs) – a critical piece of equipment for preventing contamination in the cleanrooms. To accomplish that, the two companies worked on a new predictive maintenance solution, based on Intel’s IoT Gateways and GE’s Predix Asset Performance Management (Predix APM) platform:

Edge computing gaming applications also multiplied in recent years due to the rising demand for AR/VR gaming experiences. The current roadblock to wider adoption, however, is high gaming hardware costs. As VR apps require significant computational power and storage for visualizations, gamers need to purchase expensive head-mounted displays, consoles, and PC rigs. Edge computing could majorly democratize the costs of VR and spur its adoption in other industries such as education, hospitality, or travel.

Case in point: Ericsson recently joined forces with Qualcomm Technologies and NVIDIA to bring a new VR solution to the market. It includes three key components:

While the solution is still in the labs, early pilots indicate that such a setup could deliver a brand-new quality level of AR/VR experiences.

By no means is this list of secure edge computing applications exhaustive. Not only smart cities and connected homes gain an “edge” in performance with this new approach to computations, but various AI-powered assistants, providing advice based on real-time data, do as well. As the edge computing market continues to expand, we’ll likely see a rising cohort of other cloud and mobile edge computing use cases coming to the fore.

Ready to usher the era of edge? Get in touch with Infopulse team for a more detailed consultation on the potential use cases and benefits your company could attain post-adoption.