Originally published: August 29, 2018 Updated: January 27, 2022 7 min. read Innovations
As an extremely secure, cheap and fast transactional platform, blockchain promotes impressive possibilities in a variety of industries helping to automate and process greater volumes of data with lower risks of errors and minimal efforts. The growing popularity of blockchain implementations far beyond financial field inspired us to run a series of articles about how this technology can reshape the face of modern world if applied in business and public sector.

The blockchain is a distributed database technology that was swiped from the Bitcoin when it turned out that it has a bigger potential to manage not only cryptocurrencies, but also exchange of other different values. The main advantage of the blockchain is that it allows synchronization of the unlimited databases that belong to the network participants who don’t trust each other. Using the state-of-the-art cryptography and distributed ledger – a dynamic, digital database held and updated independently by each participant (node) that does not require a central authority for data reconciliation – the system becomes a perfect solution to build decentralized environments for independent parties who want to cooperate within a short time based on the consensus principles.

Elimination of intermediaries is a key blockchain’s feature and a game-changing opportunity for our world. Without third parties involvement, users become in control of all their operations and values shared. As each party is interested in the verity of the information and responsible for transactions’ validation, the risk of dirty deals is extremely low.

The particular appeal of the blockchain, in this case, is derived from the “smart contract” – the new computer protocol, which digitally facilitates, verifies and/or enforces the performance of a certain agreement. Blockchain-based smart contracts impartially regulate all users’ activities without the middleman participation leaving users ahead of their information and processes. While the script language provided by Bitcoin allows creating only a limited set of custom contracts to support escrows, cross-chain trading or multisignature account, Ethereum has made one step further and enables developers to use a Turing-complete language on its blockchain to create truly custom smart contracts. Instead of the legal lingo, a set of terms and conditions that the other parties agree to abide is written in code and placed on the blockchain. As long as the code is executed as intended, the contract remains secure and impossible to breach.

Smart contracts have allowed reconciling a large array of blockchains existing out there and powering specific applications. Instead of developing new blockchains for a different type of application, smart contracts made it possible to add several types of applications to a single blockchain and make sure that all of them follow the same set of rules. Additionally, smart contracts have enabled users to create niche agreements for small operations – when it doesn’t make sense to create a separate new blockchain to govern those. For instance, a small business owner wants to place an order with a new supplier he does not trust yet. The party can then create a smart contract that will outline the deliverables and associated delivery terms, lock the pre-payment for 10 days and the vendor will get paid once the goods have arrived and if all the specified terms are met.

Within the financial industry, smart contracts are expected to save investment banks up to $12 billion annually as the code could automatically perform intended actions when a predefined condition occurs, thus eliminating the need for manual interference. Deploying smart contracts to govern financial reporting could also cut down the infrastructure costs by 30% on average, while ensuring better transparency and data quality. Finally, the compliance costs and centralized security operations such as “know-your-customer” checks can be reduced by 50%. The very same approach can be used towards optimizing a wide range of transactions happening in other industries, as the paper will further illustrate.

Another strength of the blockchain technology is its separation into public and private approaches with different permissions structures. In general, there are three types of blockchain networks an organization can develop:

It is the type of chain, any participant can read, add transactions to and expect them to get included as long as they are valid; and participate in the consensus process – that is determine whether a new block should be added to the chain. All the actions on the public blockchain are secured by cryptographic verification mechanisms such as proof-of-work or proof-of-stake. Such chains are usually characterized as “fully decentralized” as there’s no single controlling authority to govern the consensus process.

It is the type of blockchain, where the consensus processes are governed by a selected set of nodes (or entities). For instance, there’s one company with 15 board members, each of whom operates one node. To validate a new block, 10 out 15 members should sign it. Consortium blockchains can have a public or restricted right to be read. Some chains also allow the general public to add only a limited number of queries and add new blocks only to selected parts of the blockchain. Typically, such blockchains are characterized as “partially centralized”.

The write permissions here are centralized to one node. The right to read may be public or restricted to certain participants only. For instance, such chains can be used for internal database management within a single company. 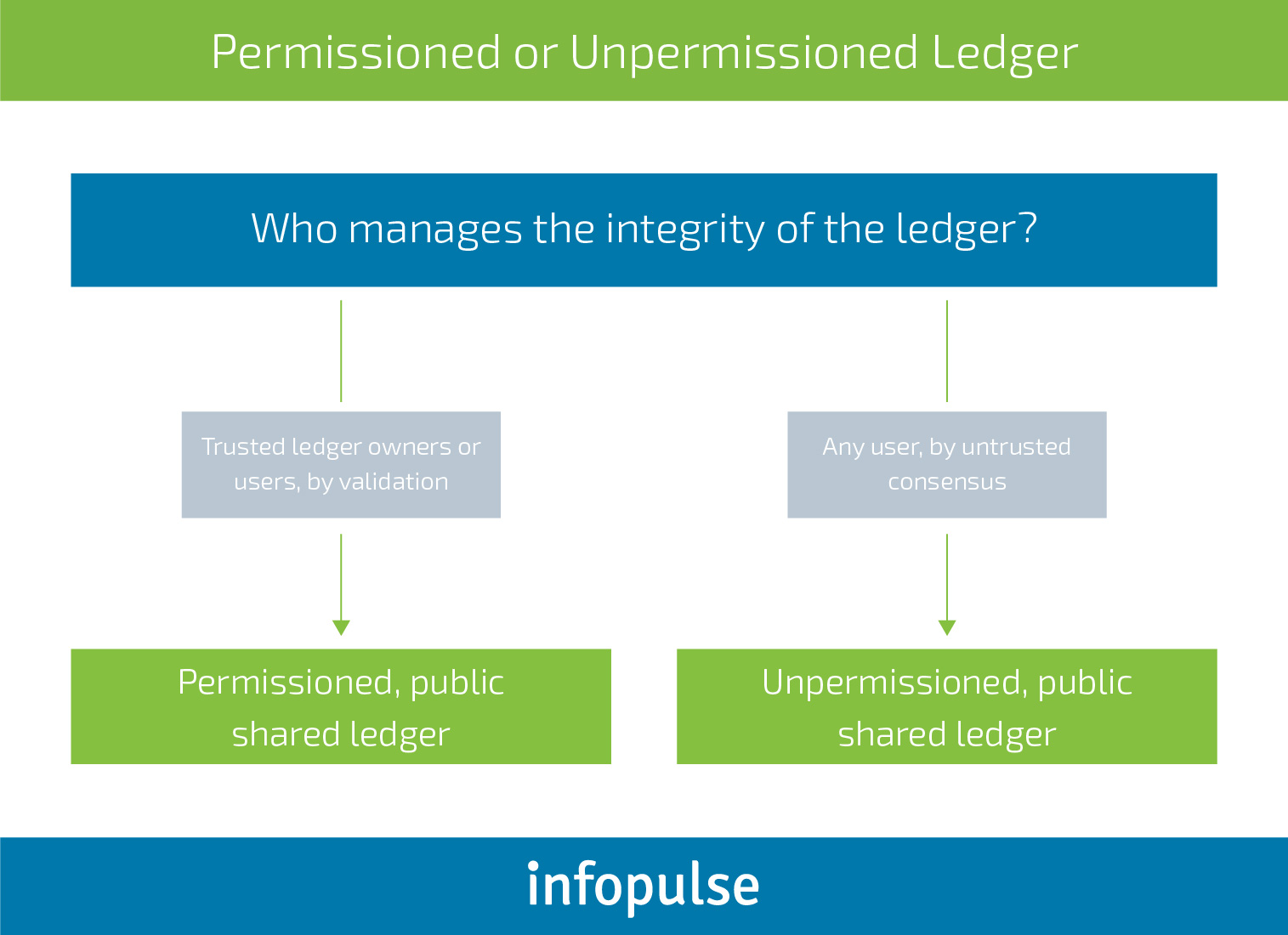 The access control mechanism for private and consortium blockchains can vary depending on the owners’ needs. Some of the common options here are the following:

Permissioned blockchain technology is a topical subject breaking new ground for the effective and secure data managing. For sure, the Blockchain technology shouldn’t be considered only as an innovative solution for the financial sector. Setting all known transaction systems on their ears, the Blockchain also provides startups with an economic growth and helps to protect and support the development of smart cities. Blockchain has already shown its potential in a wide number of areas. Let’s take a closer look at how it may affect non-financial industries, namely:

Healthcare industry generates terabytes of information every day ranging from patient information to payment data and clinical trial results. Storing, exchanging and protecting this type of data is critical for healthcare providers. However, managing and reconciling the data from multiple sources is challenging.

Blockchain can be used to positively impact the movement of big data between different parties, streamline and secure those transactions; improve billing procedures; contract and asset management workflows; and improve data exchange among different medical devices including IoT.

This technology can successfully tackle the next pressing industry hurdles:

Read more on the blockchain use cases in healthcare.

Progressive governments now strive to build a more transparent and collaborative rapport with the citizens and streamline the routine bureaucratic processes ranging from the registration of assets to voting and government contract management.

Blockchain has become the key tool to support such initiatives as the technology enables seamless and secure data exchange, storage, and registry. Critical information can be shared seamlessly, openly and securely, while remaining accessible to the general public. Most governmental blockchain projects are still in the development stage, yet promise to bring significant shifts within multiple domains:

Read more on the blockchain use cases in the government sector.

3. Blockchain in the Energy Industry.

The rising adoption of IoT gadgets powering the smart city ecosystems, electric vehicles and virtual plants poses new challenges for the energy market. As the global demand for power keeps rising, key players will need to perfect their balancing act and optimize the supply process.

The rise of the so-called prosumer – an active class of consumers generating and accumulating their own energy – also agitates the energy market to become less centralized and more accessible to individual entrants.

Peer-to-peer electricity trading projects have been tested in multiple locales around the globe with the help of blockchain. The technology enables higher visibility and allows to trace and audit all the energy exchange transactions happening between different entities. The technological nature of blockchain also promotes higher trust and reduces the need for a centralized authority or intermediaries during the power exchange process.

Beyond P2P energy trading, blockchain technology can drive value for the following processes:

Read more on the blockchain use cases in the energy sector.

Insurance contains two types of data: static – all information records, and dynamic – transactions that should be managed by both insurance vendors and consumers. Moreover, the main requirement for this data is that it has to be available on the knocker. Such conditions impose creation of the strong and secure system that could manage all this data in a proper way. Fortunately, we already have such system – the blockchain.

The most transformative use cases of blockchain in the insurance industry include the following ones:

Read more on the blockchain use cases in the insurance sector.

While most blockchain research endeavors are concentrated around financial applications or the technology itself, the interest to use blockchain in the manufacturing industry is gaining momentum. Current studies foresee that in some 20 years the blockchain will dramatically change the face of modern manufacturing. This transition is called the fourth industrial revolution (Industry 4.0).

Read more on the blockchain use cases in the manufacturing industry.

Until recently, the telecom sector has kept afar from the blockchain scene just watching with mere curiosity the “fancy” technology spreading in other industries. Now telecom’s growing interest to “distributed ledgers” (a general nickname for different kinds of blockchains) is obvious.

Besides common expectations like reducing costs and improving efficiency of existing processes and infrastructure, Communication Service Providers (CSP) see the blockchain technologies to evolve in the following areas:

Read more on the blockchain use cases in the telecom sector.

To sum it up, blockchain implementations in the non-financial sector can provide advancements never seen before. New ideas of blockchain realizations arise every day. However, despite the massive hype around blockchain as a universal solution and a new hi-tech religion, it is worthwhile to have a look at the other side of the matter.

In the next article, we will explore the pros and cons of blockchain era with regard to non-financial industries.