Originally published: October 18, 2019 Updated: September 13, 2022 11 min. read Innovations Business Applications
The platform-based business model is taking a stronger grip on the digital economies. In fact, seven out of ten of the world’s most valuable companies today are platforms. Most recently, this trend has accelerated even further as companies cross-industry have started to shift away from single-purpose to multipurpose apps, resulting in the rise of a brand new breed of product – the Super App.

What is a Super App?

Originally, the term ‘super app’ was coined by BlackBerry founder Mike Lazaridis back in 2010. He defined it as “a closed ecosystem of many apps” that people would use every day because they offer such a seamless, integrated, contextualized and efficient experience.”

In short, a super app is a marketplace of services and offerings, delivered via in-house technology and through 3rd party integrations.

Today, however, super apps have become synonymous with the rising array of Chinese super products, namely WeChat and Alipay. 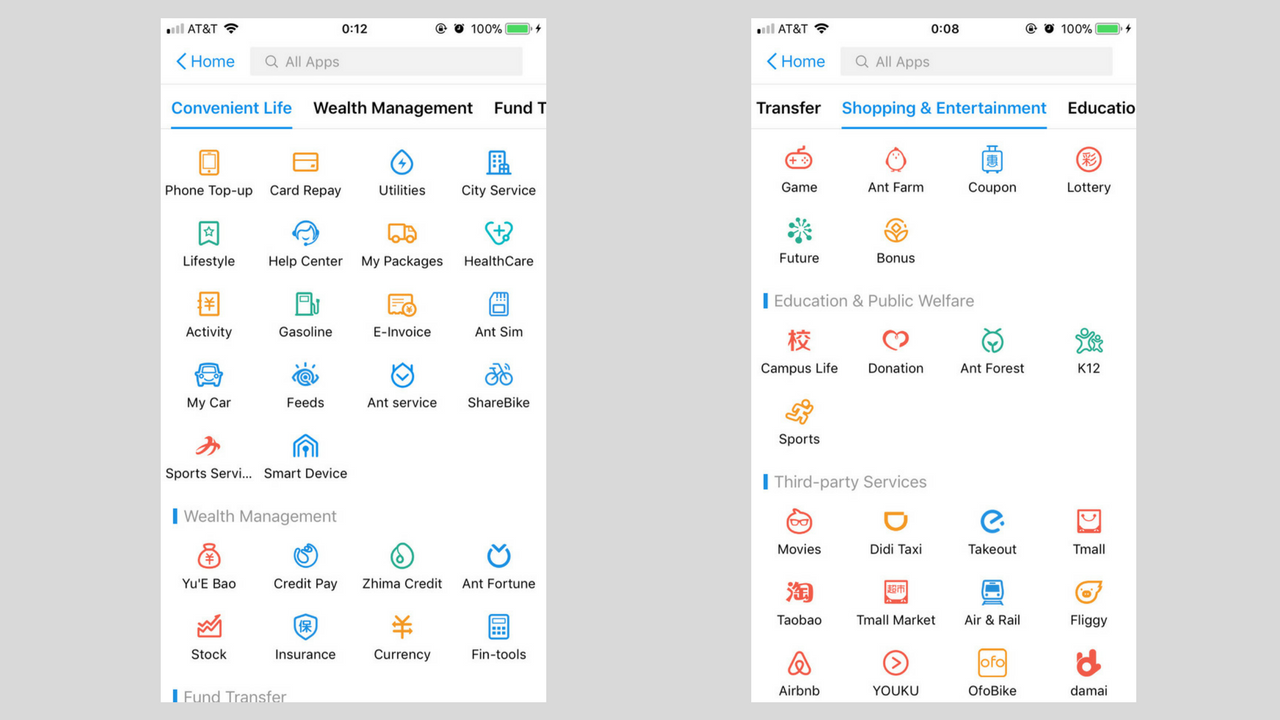 WeChat launched in 2011 as a messaging app. Nearly a decade later it has morphed into an ecosystem, hosting 1 million “mini-programs” that allow users to do a lot of things – order a taxi, apply for a loan, transact with local businesses, government service providers or even celebrities. The best part is that all of these transactions (including payments) happen within the WeChat ecosystem.

As a result, WeChat managed to achieve a $7 average revenue per user (ARPU) – that’s 7X the ARPU of Whatsapp.

Alipay, part of Alibaba, has an even more tightly knit ecosystem of services. First, it’s the main payment method on popular e-commerce platforms Taobao and Tmall (owned by Alibaba). The company collects social and transactional data from these three services and sends it to Ant Financial, its financial services arm. Ant Financial, in turn, uses it to build a credit-rating system for merchants and consumers and provide personal and business loans. The secured funding will then return to one of Alibaba’s e-commerce platforms as merchants will purchase more inventory.

Furthermore, the benefits of the super app approach extend to:

Cross-Industry Super App Examples – From the East to the West

WeChat isn’t the only super app taking over the East in one massive swipe. Grab, a ride-hailing company headquartered in Singapore and with heavy market presence across the SEA region acquired the local sub-division of Uber and UberEats. Later the same year, Grab started paving its way towards payments. The company invested in OVO, a popular payment platform in Indonesia. This year, they are negotiating another deal with DANA, an Indonesian FinTech payment platform, and plan to merge it with OVO. 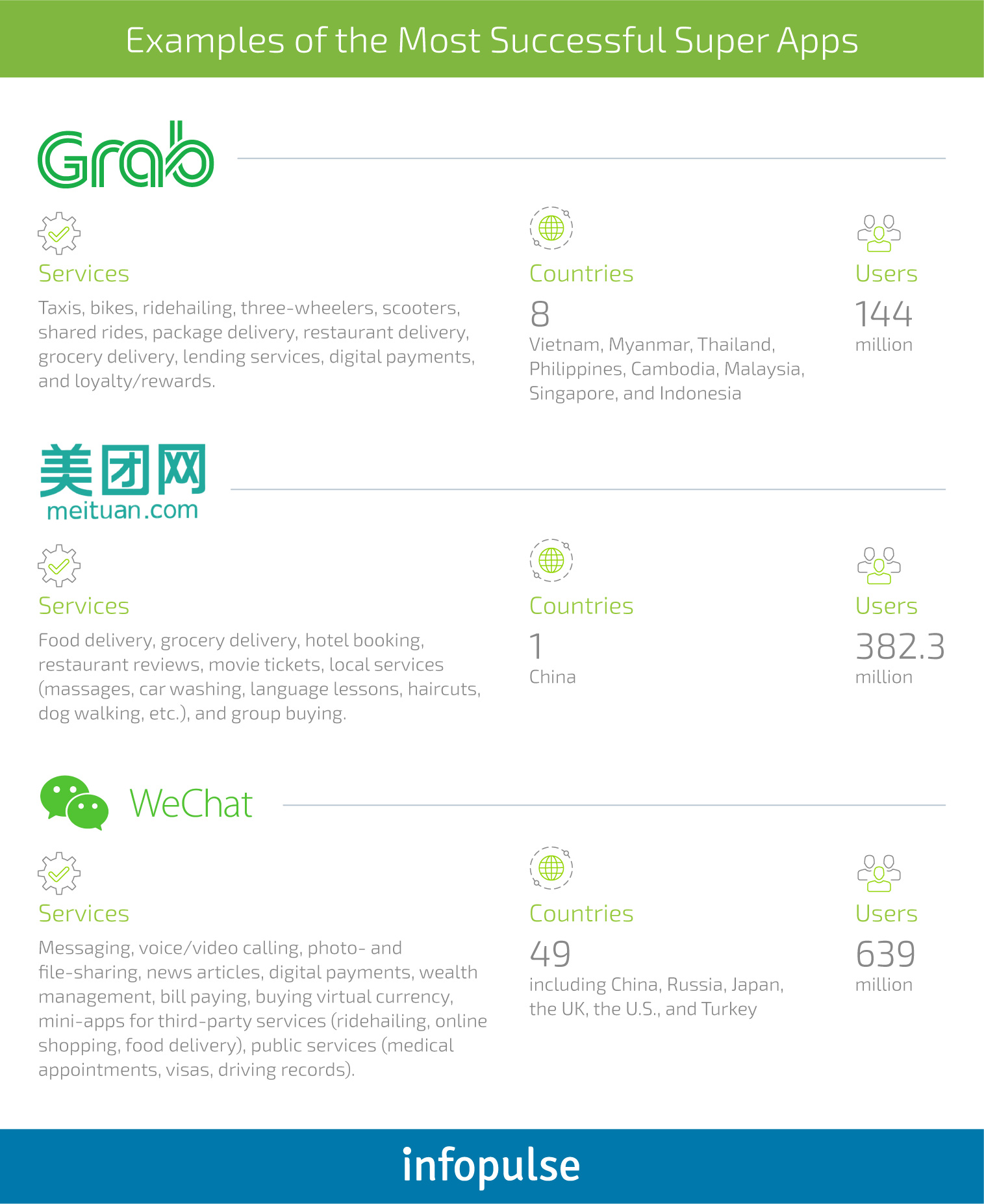 Grab also raised $2 billion from SoftBank and China’s Didi Chuxing to launch GrabPay – a branded mobile wallet app and payment service. As bank penetration rates in the region are as low as 27%, Grab decided to step forward in the arena as a more affordable, inclusive and convenient financial service. Beyond e-hailing and payments, Grab is in the process of adding another suite of offerings to its platform:

Other ‘superpower’ apps hailing from the East also include:

In the meantime, the West is yet to see the rise of the local super apps. Some experts even say that a WeChat scenario will never be possible in the European markets or Northern America. Indeed, due to the different regulatory environment and market conditions, it’s hard to imagine the exact super app scenarios, which we are seeing now, in the East.

However, it does not mean that local players aren’t pursuing platformization and marketplace routes. Quite the opposite. Take Google Maps for example. While the company’s executives never stated that they want to pursue the ‘super app’ route, over the last several years they have continuously expanded the scope of features:

Google Maps does not have a connected payment service like WeChat does, and, perhaps, that’s the reason why it’s not boasting a super app status yet.

Verizon also started the process of consolidating its media powers. Earlier this year, the company announced a new ‘shoppable’ strategy, devised by Guru Gowrappan, a former Alibaba executive who took over as Verizon Media’s CEO 9 months ago. The company has already introduced a new ‘deals’ tab on Yahoo Mail as the first attempt towards enabling ‘inbox commerce’. Further, Gowrappan said that they plan to monetize content and other assets on all of Verizon’s media properties and enable users to effortlessly shop for goods and order services without leaving the website or the app.

Arguably, the most prominent example of super apps in the West is Facebook’s already controversial Calibra digital wallet and the underpinning Libra cryptocurrency. The company’s short-term goal is to launch a new digital cryptocurrency wallet by 2020 and integrate it with other Facebook major products – Messenger, Whatsapp, and Instagram. The newly formed Libra Association, in charge of the project, already has several high-profile bakers on board including Uber, Lyft, eBay, FarFetch, PayPal and several other tech and financial services providers. If the project ends up being successful, Facebook will be the first US tech company to tap into the financial market, capable of further expanding the scope of services from P2P transfers to merchant transactions, loans, credit and commerce – a clear page from the WeChat’s books.

However, despite increased interest from tech players, it is the financial sector that strongly gravitates towards the super app approach. In particular, the newly-emerged digital banks and FinTech players are at full speed ahead into transforming their ecosystem of services into open banking marketplaces. 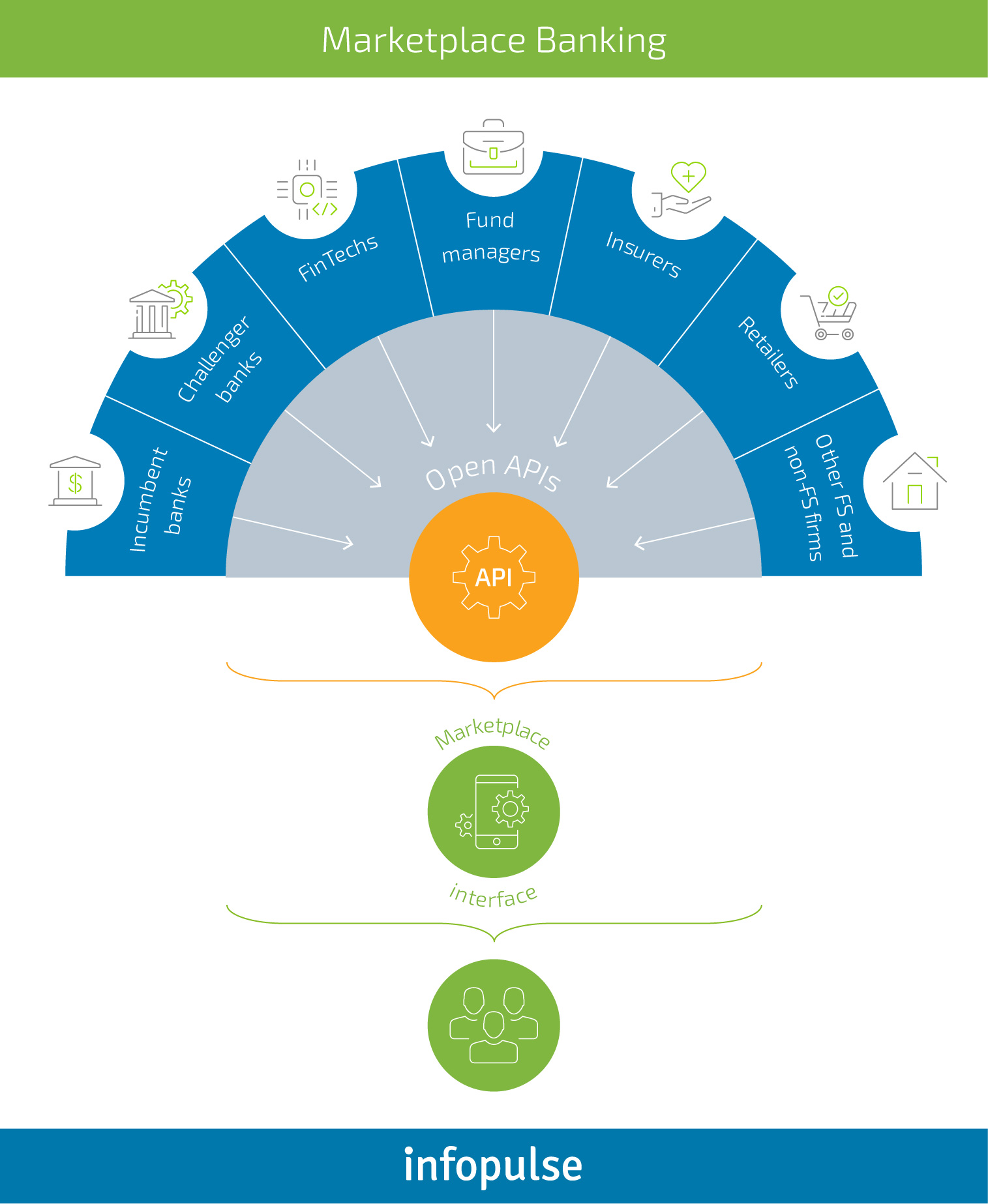 In established markets, banking consumers are demonstrating an increased affinity towards all-encompassing banking solutions. A recent survey of UK consumers and SMEs revealed that:

Moreover, consumers are experiencing ‘app fatigue’ and the need to switch between a variety of financial services providers. Hence, as much as 46% of respondents said they are looking forward to the addition of new services that could be enabled by open data: 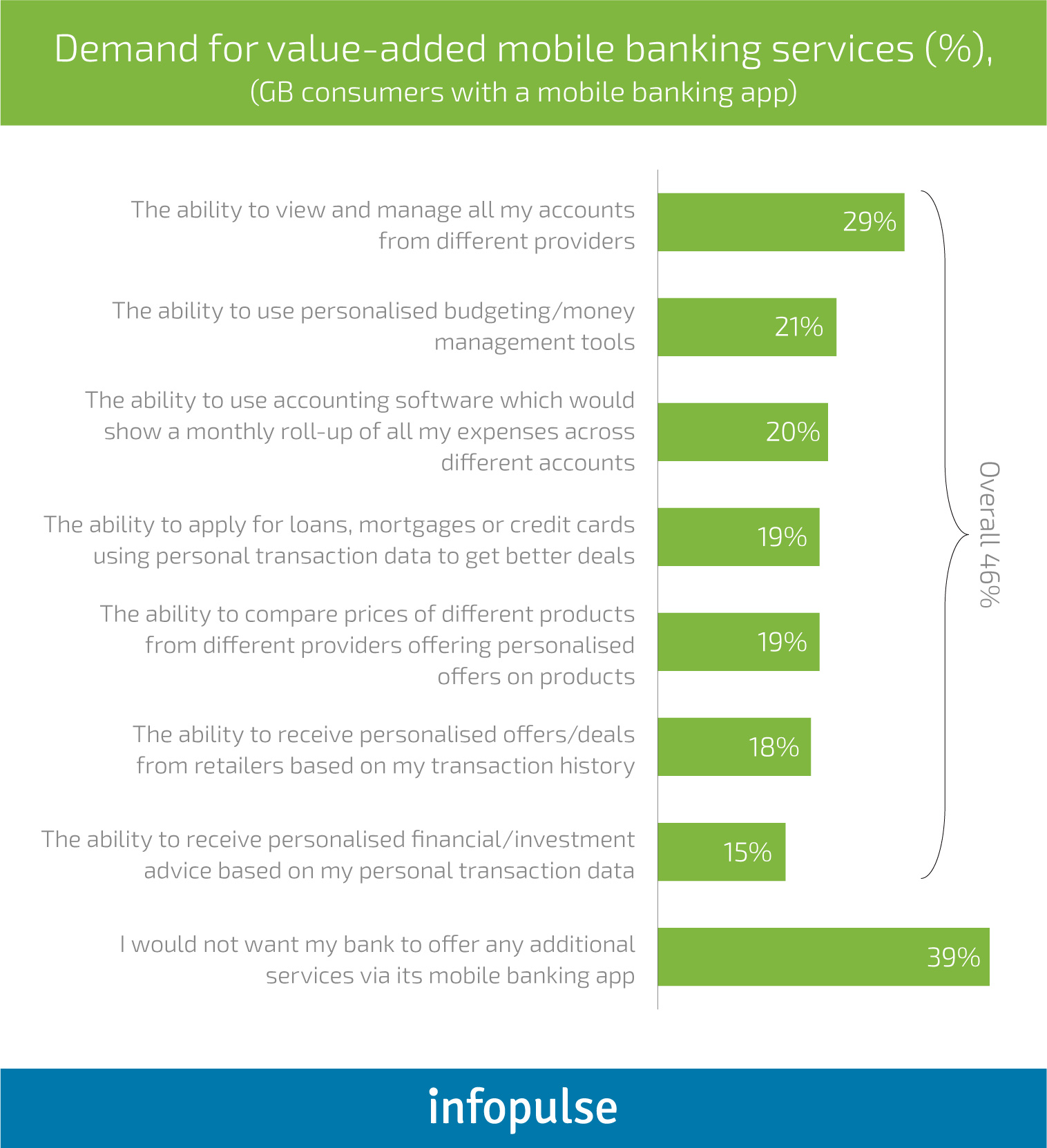 Agile digital banks are already taking the consumer cue and are stepping away from the traditional vertical integration business model towards building their ecosystems, populated with in-house and integrated products:

Startling, a UK digital bank, integrated several partners to their ecosystem allowing users to invest (via Wealthify), create a pension plan (via PensionBee) or compare mortgage deals (via Habito). Last year they launched a dedicated app Marketplace and have been steadily onboarding new partners.

Revolut, another FinTech unicorn from the UK, allows customers to purchase travel and device insurance, request a personal loan, send donations to selected charities and most recently – buy and sell shares. Again, most of these features are run through API integrations with 3rd parties.

The trend towards super apps and marketplace approach to scaling will remain strong within the next decade. The benefits of following this lead are rather clear: by connecting different types of services into one ecosystem, businesses can create valuable synergies resulting in higher user satisfaction, sustainable business growth and higher revenues.

SoFi, the 5th largest FinTech company in the US, which started as an online student loan refinancing platform, organically branched into robo-investing and wealth management, mortgages and life insurance – a host of products customers may be highly interested in after paying out their education debt. Most recently, they also launched SoFi Money – a no-fee hybrid checking and savings accounts with a 2.25% APY. Such a service bundle provides them with comprehensive insights into customer financial behaviors and allows devising better offerings.

Consolidating an array of services under one brand reduces the ‘multi-homing’ effect when users try to leverage several financial services at once to secure a better deal. Customers form stronger relationships with a single provider, resulting in higher levels of satisfaction. Service providers, on the other hand, strengthen their market position and prevent external players from siphoning their customers away.

Infopulse team has acquired recognized experience in building innovative banking products and digital financial solutions. Let’s explore together the brave new world of marketplace possibilities for your company. Contact us today for a free consultation.

Oleksandr Nikolaienko has 20 years of overall IT experience, 15 years of which he dedicated to project management and business analysis. He contributed to the development and delivery of financial software, risk management solutions, internet and mobile banking solutions. He has proven expertise in managing the entire portfolio of projects in FinTech, Logistics, and Telecom. Oleksandr is a highly qualified expert having earned such international certifications as Project Management Professional (PMP)®, Certified ScrumMaster® (CSM), Certified SAFe 4 Agilist® (SA), and ICAgile Certified Professional – Delivery at Scale (ICP-DAS).
View author's articles