Originally published: April 07, 2020 Updated: October 25, 2022 8 min. read Digital Transformation Cybersecurity
Communication networks need to be resilient. Especially, as the scope, variety, and complexity of current cybersecurity threats are increasing exponentially. The growing volume of data transmissions, legacy technology, and signaling protocols, the increased role of cloud technologies and “old-fashioned” DNS and DDoS attacks are among the most common “bullets” telcos need to dodge on a daily basis. Let’s take a closer look at the key of them.

The Main Types of Cyber Threats and Ways to Mitigate Them

A number of core telecommunication services are still powered by flawed protocols such as SS7 (Signalling System No. 7) or Diameter. SS7 protocol, in particular, has become one of the central cyber threats to the banking industry since hackers can easily intercept 2FA authentication codes and drain users’ accounts.

Newer protocols such as SIP (Session Initiation Protocol) can also be extremely vulnerable to cyber threats without proper controls in place. For instance, in 2018 a group of attackers managed to stage a denial of service (DoS) attack on Cisco equipment through leveraging malformed SIP traffic.

However, implementing better signaling controls is proving to be a challenge for most telecoms due to the following:

Granted, according to a report by the European Union for Cybersecurity, most telecoms have implemented the basic security measures for SS7 attacks: 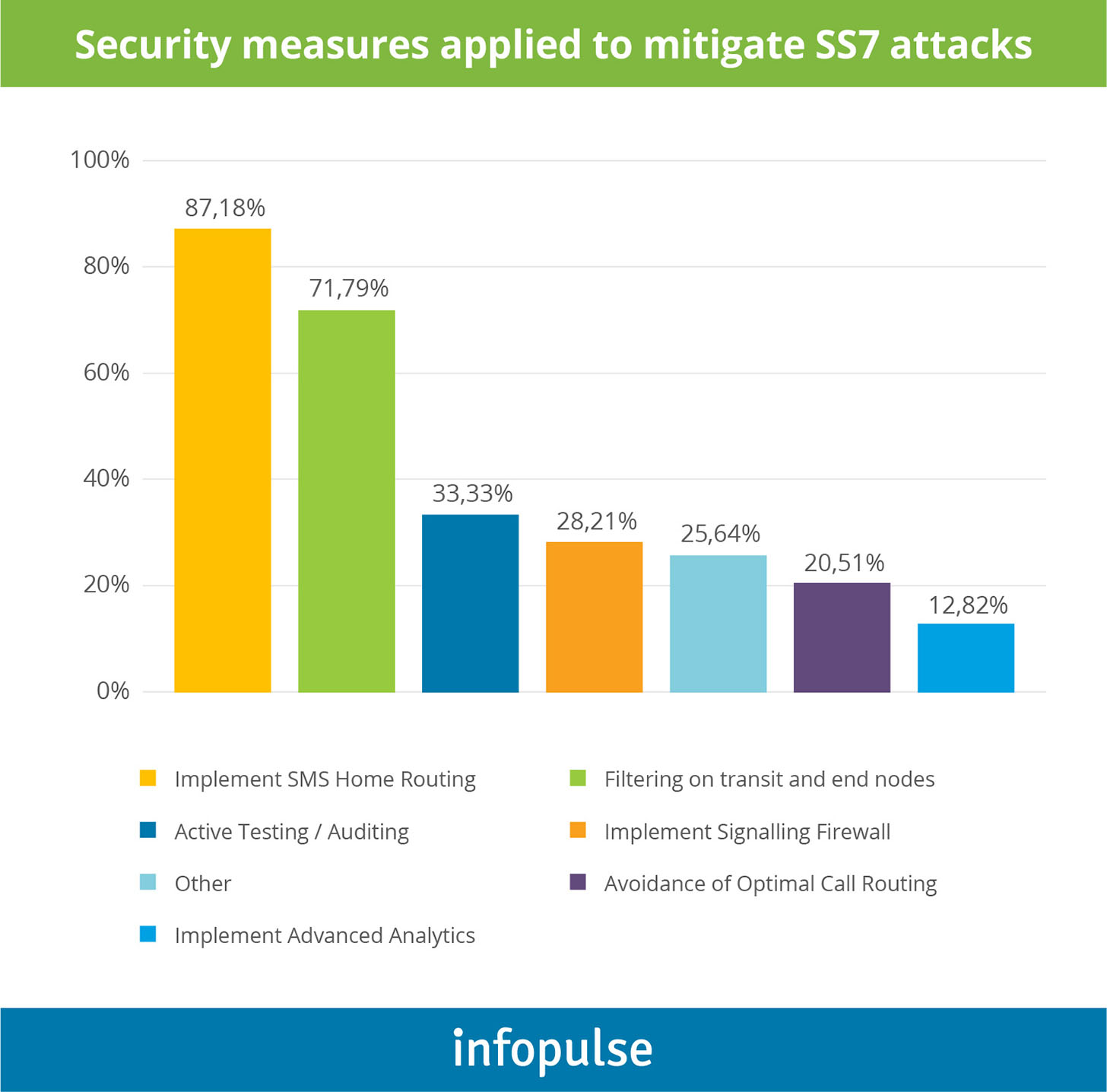 Also, keep an eye on updates from the Fraud and Security Group (FASG) work group organized by GSMA that is working on new end-to-end interconnect telecom security solutions for LTE and 5G networks.

Session Initiation Protocol (SIP), used in most voice-over-IP (VoIP) communications, is another prime target for malicious parties. Without proper telecom security system, hackers can easily tap into encrypter calls, distribute SIP malware and otherwise tamper with the VoIP services you are provisioning.

Here’s a list of cybersecurity threats that were common in 2019:

Utility suppliers in the US faced a series of VoIP attacks last year. An attacker was initially targeting 1,500 unique gateways tied to some 600 businesses, but later focused on a single company and, using a command-injection technique over HTTP, injected a malicious web shell into the company’s server outgoing directory. Granted, the hack was discovered in time before much damage had been done.

DNS (Domain Name Security) attacks still remain a major sore point for telcos. What’s worse, the cost of such attacks is increasing year-over-year. As per Global DNS Threat Report, around 79% of the organizations faced DNS attacks in 2020. On average, the cost of a security incident was 924,000 USD. However, these stats are slightly better than a year before: the source’s report for 2019 indicates that 82% of companies experienced DNS attacks that amounted to 1.1 million USD on average.

Telecom and media became the most favored industries by attackers: averaged 11.4 attacks, with 8% incurring losses more than 5 million USD per attack. What this data is telling us is that most telecoms are completely unprepared for the latest cyber threats from this group. So, let’s brush up on the key security measures.

Telcos are the prime target for DDoS attacks. As much as 65% of the global DDoS attacks in 2018 were aimed at communication services providers and the figure still remained high in 2020. Another recent report reveals that the following DDoS attacks are on the rise too:

How Telcos Can Protect Against DDoS Attacks

In 2021, Gartner estimates that some 25 billion IoT devices will be connected to telecom networks. Accommodating such an increased volume of data is just one part of the challenge for telecom security though. Preventing unauthorized access, securing data transmissions and ensuring smooth monitoring of a much larger attack surface are the key security challenges for telcos.

Despite low adoption, IoT devices have already proven to present both internal and external threats to cybersecurity. First of all, the device itself can be exposed to various cyber threats and vulnerabilities due to manufacturing issues that might hinder a telecom security system. Secondly, misconfiguration and lack of proper security measures make an IoT device an easy entry-point to the entire network of devices, or worse – the supporting architecture. In short, most attackers will have an easier way of finding a leeway as the surface of attack increases.

Some of the common types of cybersecurity threats happening at network level are as follows:

Offering solid protection against these is a joint responsibility between network operators and IoT users.

GSMA has already developed a comprehensive IoT security assessment checklist for telcos, along with several supporting documents with security guidelines. Below are some of the key best practices the association proposes against common cybersecurity threats: 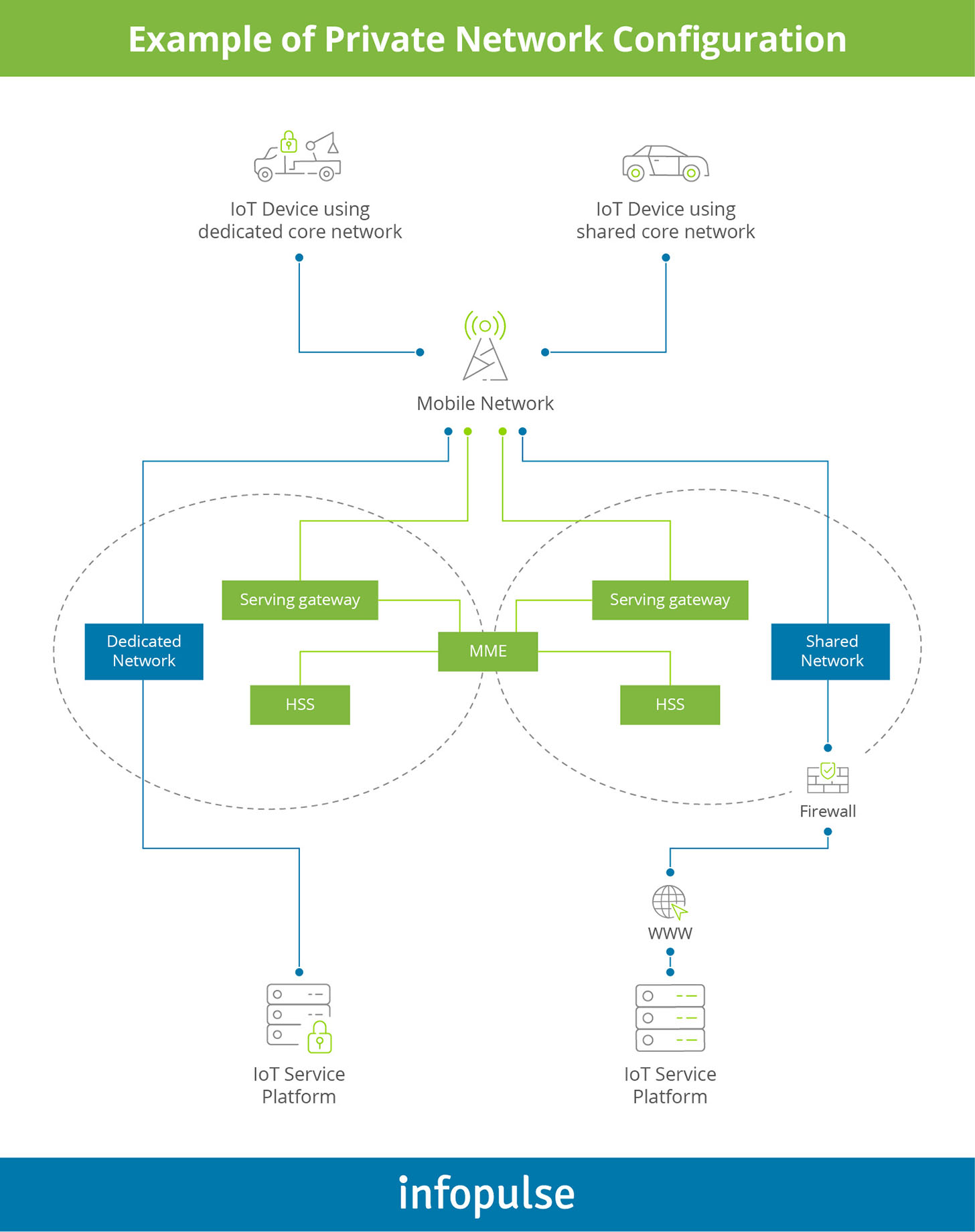 Telecom players have both an exciting and complex time ahead. On the one hand, the industry is undergoing major transformations, resulting in new revenue opportunities and value streams. On the other hand, an increased presence of new assets (such as IoT devices) and increased pressure on the old communication protocols enlarges the defense perimeter every telco needs to create.

Ultimately, to have strong and reliable telecom security mechanisms, you will need to switch from reactive security to proactive – one that relies on extensive monitoring and has predictive capabilities, powered by advanced analytics and AI. Conduct proper risk assessments for current systems, decentralize and automate the core security requirements with appropriate tools and run even deeper assessments for emerging technologies such as IoT, 5G, and NFV among others.

Having strong telecom expertise, Infopulse also provides a comprehensive scope of enterprise IT security services ranging from preliminary security assessments to comprehensive Security Operations Center (SOC) as a service. Let’s work together on strengthening your network resilience and future-proofing your operations against emerging threats!

Alla Oliinyk is an established expert with 9+ years of experience in the telecom industry and wholesale voice/SMS traffic exchange. She has broad expertise in managing cross-functional teams responsible for various telecom operations activities. Alla participated in numerous successful projects, including a decade-lasting collaboration with BICS, receiving both personal and team awards for managing client relations with the most demanding customers and outstanding contribution to the company's development.
View author's articles